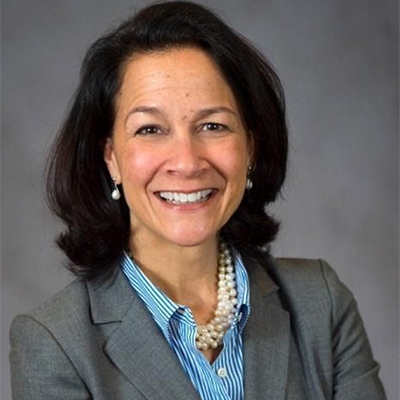 Jen Velez is a deeply experienced community health executive, working to improve the societal and economic issues that impact vulnerable communities, most recently as an Executive Vice President of RWJBarnabas Health, where she led the health system’s interdisciplinary response to the opioid epidemic. During her tenure, she expanded the peer recovery specialist model and medication assisted treatment as effective interventions to combat the disease of addiction, as well as introduced the community health worker model as an evidence-based, effective workforce model to address and improve social determinants of health.

Ms. Velez joined Barnabas Health in March 2015, as Senior Vice President of Strategy and Planning, after serving for eight years as Commissioner of the New
Jersey Department of Human Services under both Governors Chris Christie and Jon Corzine. She has the distinction of being the State’s longest-serving Human Services Commissioner where she managed the largest State agency with budget, personnel and operational responsibility for nearly $11 billion, approximately 16,000 employees, eight operational divisions, including Medicaid, five developmental centers and four psychiatric hospitals. Ms. Velez received her Bachelor of Arts in Economics from Drew University and holds a Juris Doctorate from Rutgers School of Law, Newark.

Ms. Velez was named Top 25 Innovators in Healthcare by Modern Healthcare in 2019, and Number 1 on the 2014 NJBIZ Power 50 Healthcare list, where she had been listed for six consecutive years. She serves on the board of Drew University, where she is a member of the Executive Committee and chairs the Committee on Trustees, and is a board member of NJ Future. She is a Visiting Associate of the Eagleton Institute of Politics. Among a number of special awards, she received the Distinguished Alumni Award from Rutgers Law School in 2017, was the recipient of the 2015 Codey Award from Carrier Clinic, and received the 2015 Spirit of the Arc award from Arc of New Jersey. In 2013, the Women Lawyers Association of New Jersey presented Ms.Velez with the Women’s Initiative and Leaders in Law Award.