Michael Taylor, a Darien, CT native, was kind, witty, adventurous, sincere and generous. He would be the first person to take the shirt off his back to help someone in need. An all-state tennis player at Darien High School, Michael also played Division A varsity tennis for three years and graduated from Villanova University and then started a career in marketing. He was a loving son, caring brother, supportive teammate, and terrific friend. In short, Michael had a magnetic spirit that cannot be defined by a string of adjectives. 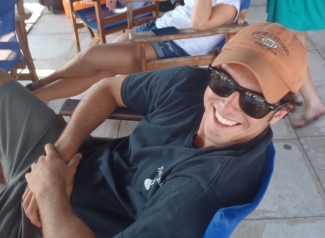 Michael also had a substance use disorder, initiated with opioid painkillers prescribed after reconstructive shoulder surgery in his junior year at Villanova due to a tennis injury. Last spring, he died from an opioid overdose, after two months’ sobriety. Often, obituaries will announce overdoses as "unexpected" but for those who live with loved ones afflicted with addiction, nothing is ever unexpected.  Addiction is a silent epidemic taking over our homes. In Michael’s honor, his family and friends are ready to help give addiction a voice and end the stigma that surrounds it.

We became inspired by Michael’s openness with his recovery efforts, and his desire to support others in their fight. Wanting to continue his mission, and honor his memory, the idea of For Michael benefiting Shatterproof was born.

On Saturday May 20 [2017], For Michael will commence with a "build your own boat" race followed by a silent auction, food trucks, lawn games, dunk tank and live-performance with Tramps Like Us, a Bruce Springsteen tribute band. All of these events represent, in one way or another, a part of life that Michael loved.

To be successful, we invite your support to fulfill Michael’s mission. We aim for this event to:

1) Be Fun: Self-explanatory (Michael would have demanded it!)

2) Be Inclusive: Substance-free and open to the entire community

For Michael is honored to have Shatterproof as a partner for this event because of its promotion of evidence-based solutions and advocacy on policy change at both the state and federal levels. The organization has provided wonderful support for families dealing with addiction and holding the important and open conversations to end the stigma. Through team fundraising and ticket sales to the event, For Michael will raise funds to further Shatterproof’s mission. This event, however, is not focused only on financial outcome.

Most importantly, For Michael aims to get the important conversations started and bring awareness to the addiction epidemic. For Michael is proud to be a substance-free event. We believe that addiction does not singularly define anyone, just as it did not define Michael.

We invite you to join us on Saturday, June 8, 2019 for the third annual Showdown on the Sound - For Michael event. This is an open event from 1PM-6PM at Weed Beach, 151 Nearwater Lane, Darien, CT. FREE admission. More information, including an opportunity to donate, can be found at: https://fundraise.shatterproof.org/showdown-on-the-sound. 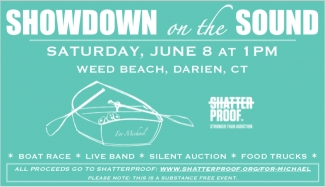