From Prescription to Addiction: One Family’s Struggle

A little over two years ago, the mother of my three teenage kids, Wynne Doyle, passed away from a prescription pain killer overdose. She had just checked out from the hospital where she had been recovering from kidney stone surgery five days earlier. Unfortunately, as is so common, no one checked her records for prescription substance use disorder signals. She had been hospitalized at that same facility over 50 times during the previous 15 years for everything from drug and alcohol overdose to self-mutilation in order to get a prescription filled. Over the five days she was there, she was secretly detoxing from the massive numbers of pills she was taking on a daily basis. She quietly checked out with her seven prescriptions, went home with my two sons, and took enough pills that night to bring her body back to the level she had been taking pre-surgery. Her heart stopped at some point during the night, and my boys found their mother the next morning.

My wife’s addiction affected the entire family. I moved out in 2008 after a tragic eight-year downward spiral stemming from opiates prescribed to Wynne after our third child was born via Caesarean Section. The prescriptions never stopped and, in fact, escalated along with the anger and shame she felt. The incidents we endured were too extraordinary for many to believe so I began to write what I could remember. Much of my motivation was anger at the circumstances that had led to her demise. The more I wrote, the more emotion poured out of me. What had started off as a beautiful seven-year period of dating, starting a family, and building my successful career had ended in a slow death as I tried to ‘fix’ the situation. If only she could realize what she was doing, I thought, then she’d stop and come back to us.

She attended 13 rehabilitation institutions; some of them considered the best in the country. She never recognized that she had a problem, and therefore didn’t embrace the treatment nor the people trying to help her. The shame she must have felt, coupled with the anger at me for continually trying to fix the situation made for a toxic environment that set her up for failure at every turn.

I decided that the kids deserved to have their mother’s life mean something so I became involved with Shatterproof, the only organization I felt understood what we as a family had figured out: Shame and stigma are perpetuating this disease. Wynne never intended to hurt us. She fell into a trap and she couldn’t get herself out. I ultimately had to leave with the kids to save ourselves from complete financial and emotional ruin. I knew I had to share my story to help other families. I was part of a Shatterproof delegation that testified at the CDC prescription guideline hearing in January 2016. I took part in a HBO documentary, Warning: This Drug May Kill You, about the opioid epidemic directed by Perri Peltz. During filming, Perri mentioned that I should write a book to fill in more of the details. I looked at the notes I had kept throughout this time, and I realized they were mainly rants that were not going to help anyone understand what happened any better, and I was not proud of the venom I had spewed (even though for me it had been cathartic to a certain extent). So I started writing and recently published my book, Sedated: The Secret That Everyone Knew. 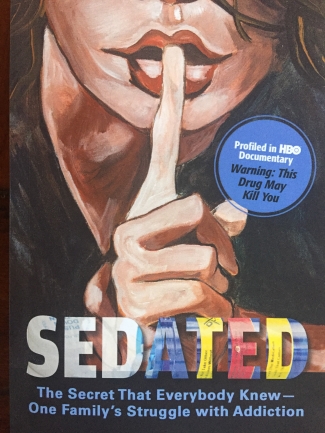 The book shares many of the extraordinary stories that led to Wynne’s death, but it also details the failures and triumphs we, as a family, had along the way. I’m hopeful that readers who have something similar going on in their home or nearby will not only find compassion for the person suffering from a substance use disorder, but connect in some way to our experiences, and make more informed decisions. In many cases, there is no right answer, and often we had to choose between two no-win situations. But today I am full of gratitude for our experiences, and that we have the ability to talk with others about them—because we all need to know and share our experiences if we want to come to grips with the heartbreaking and humbling national epidemic of opiate addiction.

Author Note: I am donating 50% of the proceeds from my book, Sedated: The Secret that Everyone Knew to Shatterproof. Please support my fundraiser by purchasing the book on amazon.com or by making a donation to Shatterproof today.