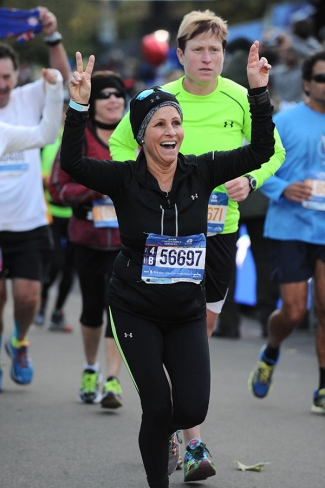 Dee has participated in two marathons, one as a “bucket list” item, and the second to celebrate her son’s recovery. After three decades working in the fashion and beauty industry, she moved into her role as Shatterproof’s Director of Family Support Programs.

Dee explains what inspired her to become vocal about the cause, her favorite NYC Marathon memories, surefire fundraising tips, and her passion to help others find comfort in sharing their experiences with addiction. 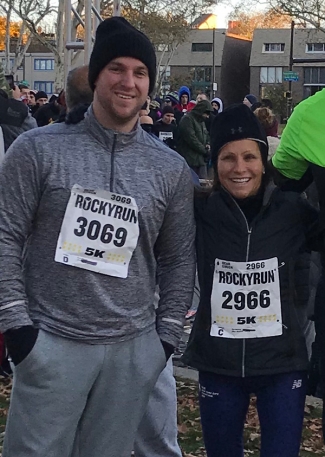 SP: When did you start running? Has it played a role in your well-being?

Dee: I started running 11 years ago. But, I really started to do more distance running when we found out my son, Sean, was addicted to opioids. I was desperately trying to understand what was happening so running became my solitude and the place where I went to gather all my thoughts.

SP: Was your son's addiction known in your community?

Dee: When we learned about it, my husband, daughter, and I covered ourselves in a shroud of secrecy for two years before we shared anything.

There were immediate family members, of course, that we talked to. But, I never discussed it outside. At the time, I was embarrassed; ashamed. I feared how my family would be perceived because the stigma is very real.

SP: What gave you the strength to move past the shroud of secrecy?

Dee: I came to a point in my life where I was focused on the wellness of Sean and nothing else mattered. What mattered is that people understood what was happening with this disease and that we were encroaching on this horrible epidemic. If this could happen to our all-American family, it could happen to anyone.

SP: Had you ever raised money for a cause before?

Dee: Yes. I raised over $10,000 for a Shatterproof Rappel event. And, I will never do that again! Let me make that clear.

Dee: I was very strategic. I was starting to share my story about Sean when I raised the money for the rappel, so I handpicked who I knew would be my donors—my close friends and colleagues.

SP: You said you were “strategic” about who you picked. You have people who you trust, who you know aren't going to judge you and will embrace what you're going through. But, how did you actually couch the situation with them? What did you say?

Dee: You know, it’s so amazing because I reached out to a very good friend of mine and said, "I'm doing this rappel." He immediately said, "You're crazy." And I said, "I'm rappelling on behalf of Shatterproof, and I need to tell you a little bit about them. This is a cause that's very near and dear to me." I didn’t even tell him about Sean. He wrote me a check for $5,000.

SP: That’s a significant contribution. Did your friend tell you why he donated that much?

Dee: Nope. And it wasn't until almost a year later that I told him about my son and our family. Then he shared about his son who’d had a gambling addiction. It’s amazing how it doesn't really become about sharing your story. If you share the cause, you don't have to tell your story…

SP: …because it resonates with people in their own way. Addiction is universal in so many forms. Everybody probably has someone in their life who has gone through a similar experience. 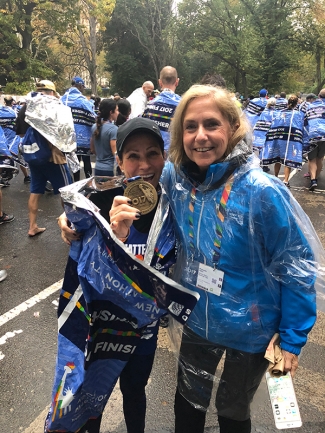 SP: What was it like running through the city during the marathon?

Dee: Running in the New York City marathon is probably, after the birth of my children, one of the most extraordinary experiences of my life. It’s truly euphoric because of all the love and the outreach from everyone. My level of gratitude was elevated to an all-time high because I remember some of my training runs were filled with tears, and such heartache, and now I was running in recognition of all of those we lost, or suffering, or recovering from this disease.

SP: While you were doing the marathon, did you have thoughts of your son and what he was going through?

Dee: Absolutely. I thought about him every mile that I ran and every time it became harder, I said to myself, “Yes, it's hard. And the race is long. But it pales in comparison to what anyone with the disease of addiction has to struggle through every single day of their life."

SP: So, thinking about Sean helped keep you moving?

Dee: When I was at mile 24, these hills that I didn't even know existed in Central Park emerged out of nowhere. I just kept thinking, "You know what? Every day, he’s working towards staying sober. Every day, he’s giving a piece of himself back. Every day, he’s running the race of life—practicing how to live a sober and healthy life." That was the driving force. 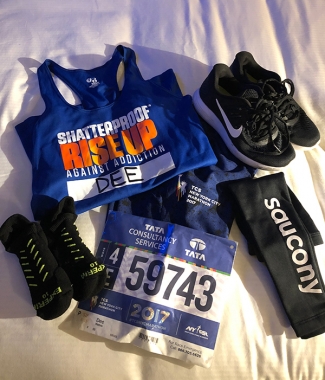 SP: Why is it so important for people to raise funds for this cause on behalf of Shatterproof?

Dee: Those funds are essential to research, for advocacy; to create principles of care so people can receive better treatments, and so we can offer support groups to families.

At the end of the day, Shatterproof is a not-for-profit organization. I think a lot of us don't understand “not-for-profit.” When we get involved in a cause, we raise funds because maybe a friend asked us, but we never really understand it from a very intimate perspective. But when you're inside of it like me and you understand that the funds are so vital to finding solutions and really making changes in legislature, then you really start to see the positive outcomes.

SP: What would you say to somebody who's never done a fundraising event?

Dee: It doesn't have to be about you or about your story. It's about a charity that you’re supporting. And think about it. How many walks, runs, and dances have you supported even when you knew nothing about them, but you did them because you wanted to be a part of that community or for a friend?

You can easily raise funds without having to share your personal story. You choose if you want to do it behind a mask, or as openly as you want.

SP: So, as a good starting point, if you’re not ready to share your personal story, it’s okay to talk about the broader impact of what the organization is doing? 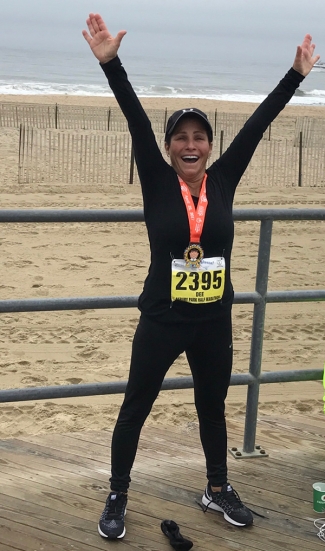 Dee: Just be social—you have to be where everyone is. And where's everyone? They're online. Use Instagram. Use Facebook. Use as many conduits to connect with others. And make sure to avoid my first mistake: when fundraising, switch your Facebook posts from “Friends Only” to “Public” so you reach the broadest possible audience.

SP: If someone was creating their own do-it-yourself fundraiser or fundraising through another event, what three steps should they take to be successful?

Example: If you're a runner, do a run. If you’re a rappeller, do a rappel. If you're somebody that loves to read books, maybe ask for donations based on how many books you can read in 10 days. Do something that is a part of your being—something that gives you a sense of comfort and your story will just blend into the activity.

2) It's never too early to start fundraising. You’re going to have ebbs and flows. You want to gain as much momentum as you possibly can.

3) Enjoy what you're doing! You are doing something great for an extraordinary cause. Have fun. It doesn't have to be hard work. And tell everybody about it. It doesn't just have to be online. Talk to your friends at work. When you’re at a family party say, "Did you know I'm doing such-and-such event?”

It’s really about sharing. If people don't know, they never have the opportunity to donate. You'll find out later on when they say, "Why didn't you tell me? I would have donated!"

SP: Of all the things you experienced during the marathon, what one memory stands out? 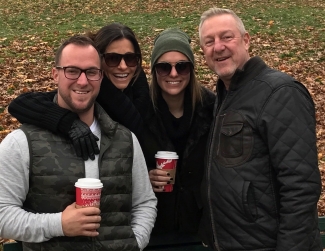 Dee: I was probably 10 or 11 miles into the race when I first saw my family along the route. They were wearing hats and all of this garb to show their support for me. When I saw my son's face, my heart filled with gratitude because I knew what this disease does and that he was there with me.

From the beginning, I was running both for Sean and for everyone impacted by this disease, but when I saw him on the side of the road, I saw his face as somebody that's going to guide others through recovery. That was a very powerful moment.

Dee: Here’s why I’ve become a part of Shatterproof: they changed my life. And now, I’m working on a Family Support program we’re launching in 2018. That's what I wanted to do—I wanted to change lives. I wanted to move people. I wanted to be that pinhole of light when there is nothing but extreme darkness. And that's what Shatterproof was for me.