Fitness Your Way Feature Story: Edie Magnus—Climbing Kili One Foot at a Time 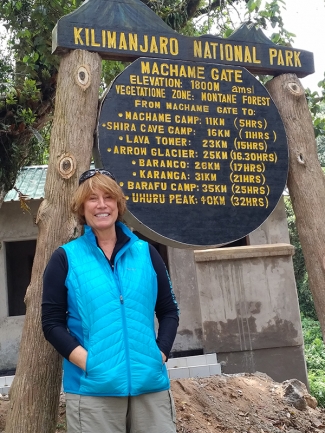 Who: Edie Magnus
Event: DIY Mount Kilimanjaro climb
Where: Tanzania
Inspiration: In memory of her brother and sister
Amount Raised: $4,786

Edie Magnus had never climbed a mountain before, let alone one of the highest peaks in the world. But in September 2016, she and a group of brave and determined women reached the summit of Mt. Kilimanjaro. She did so in honor of her brother, Billy and her sister, Eleanor, both of whom she lost to the disease of addiction.

Edie currently serves on the Board of Advisors for Shatterproof.

SP: Of all the different ways you could’ve honored your brother and sister's memory—a walk, a run, etc.—what fired you up to take on such a demanding physical challenge?

EDIE: I heard about this amazing group of women climbing Mt. Kilimanjaro. When I read their website headline: “What’s within you is stronger than what’s in your way,” it occurred to me that, saying yes to this challenge, could help me lessen the heaviness—both literal and figurative—of my losses, lead me back to myself, and allow me to honor and celebrate Billy and Eleanor, who never actually reached the summit of their own “climbs.”

SP: When you told your community that you were going to climb a mountain in Africa, what was their response?

EDIE: The response varied but I have two other brothers and one of them texted me, "You're out of your ***** mind."

I’d like to say everyone was supportive, but I saw it behind their eyes—they couldn’t imagine that I could actually do this. I looked up the stats: only about 50% of people who attempt the climb complete it. And those might be expert climbers in wicked good shape. So, the odds for me were long. 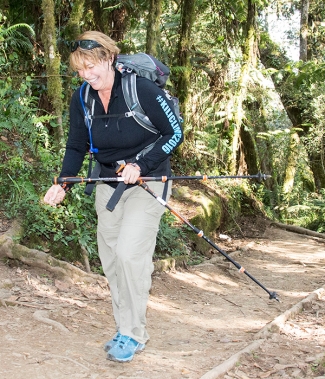 SP: What kind of training was necessary for the climb?

EDIE: I trained really, really hard from June through September when we left for Africa.  Mostly, I was in the gym five and six times a week. I was on the treadmill carrying increasing amounts of weight in my backpack. I did a lot of spin and other cardio to get my heart rate up. I also practiced as best I could—using a mask that can simulate decreased oxygen levels to help you experience what it feels like. My only training outside the gym was with a colleague and friend, Chuck Garcia, at Bear Mountain (one hour north of NYC) for a single day. Chuck’s an experienced climber who has done Kilimanjaro, Everest, and many others.

SP: How physically active were you prior to your training?

EDIE: Not very. There was a time in my life when I was very active but truthfully, I’d stopped caring about my own health. I remember the precise moment I plucked some fattening pastry from a food tray at my brother Billy’s memorial. A tiny voice inside said, “Screw it. Who cares?” I didn’t care what I ate. I stopped regularly going to the gym. Loss can take a foothold in your life, and you deal as best you can. I saw this for what it was—part of being sad about losing my siblings.  So, the climb was an opportunity to get physically active again.

SP: When you were training, do you feel like the physical activities provided you a kind of coping mechanism?

EDIE: It just kept me busy and I’d committed to it. The workouts weren't therapeutic in that way. But climbing that mountain was extremely therapeutic.

SP: Can you tell me a little bit about Billy and Eleanor?

EDIE: Billy was the one who was the most “everything” in the best of ways: He was the most musical, the smartest, the most gifted athletically. And he was the most charismatic.  But he was also, for a lot of his life, the most troubled.

Eleanor was sort of the fairy princess of our siblings. For those who know this reference, we called her Gracie Allen because she was just sweet, silly, and goofy in certain ways. She didn't struggle with drugs until later in life. Billy started early. He was the classic story you hear—somebody who starts smoking pot and moves on to the hard stuff from there.

SP: How did the addiction affect your relationship?

EDIE: It affected the whole family. I can't even begin to tell you the number of ways in which we had to deal with their addiction as part of family events. Every time we had a holiday we had to worry about what condition they were in.

Most of my memories about Billy involve getting him out of jams. Like pulling him out of police precincts and just doing what needed to be done to clean up the carnage from the various messes he made. Yet, I loved him. I loved both of them deeply. Truly, madly, deeply.

I think Billy was more closeted so, even though we knew what he was doing, he didn't talk about it very much. But with Eleanor, we were very open. In fact, we did a formal intervention. We put her in what turned out to be the first of two, long, in-patient rehab facilities. Neither of which helped her at all.

SP: That must have been heartbreaking to witness.

SP: How are you now?

EDIE: Fine, except you just understand that, on some level, you will always carry a certain sadness. I think of them a lot.

SP: Let’s shift gears and talk about fundraising. What was your approach?

EDIE: I'm very aware we all have things we care about and a finite amount of resources. So, I basically said to my friends and family, “If you care about this, I'd be honored if you would support me in it.” I understand why people are leery of asking for donations, but I never hesitated because I know how pervasive addiction is.

If it’s important to you and those around you know it's important to you, I think there is every reason to enthusiastically ask your friends and your loved ones to support you in raising money to eradicate addiction.

For me, the more interesting aspect of fundraising wasn’t the total amount I raised, it was the significant number of people who contributed.

SP: Did that surprise you?

EDIE: Yes, I was thrilled by it. It's also an awesome responsibility because I'm climbing up that mountain and somewhere in the back of my head I'm thinking to myself, "I can't let these people down. They committed money for me. I better keep climbing."

SP: Tell us about the climb. 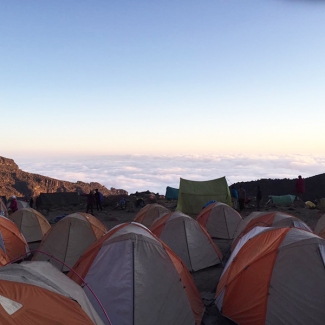 EDIE: I found it surprisingly solitary. You start out together (we were in two groups–slower and faster–and of course I was immediately placed in the slower group, which was just fine) but inevitably people proceeded forward at their own pace, hiking several miles and hundreds of vertical feet up each day. You’re mostly looking down and you’re often not talking. I guess I envisioned us moving together: chatting, panting, and planting our poles as we hiked.

Somehow, I successfully tackled the ascent by putting one foot in front of the other. But it could be lonely. And absent other voices, the voice in my head needed to be relentlessly positive. Or at least commanding: “Just Keep Going!” is what I mostly remember.

So often we’re encouraged to think strategically: Don’t Lose Sight of Your Goals. Keep Your Eyes on the Horizon. Begin With the End in Mind. That kind of thinking would have been paralyzing to me. The only way forward was looking down.

All of which got me to thinking about Billy and Eleanor, who were each in the grips of addiction for many years. For them, every day must have been like looking up at Kili. The prospect of living drug-free existed almost as a taunt, unattainable, as far away as that summit. I’m pretty sure they each felt alone, ashamed, and hopeless; felt their lives were irrevocably derailed; and felt the path to the top was simply unachievable.

More than once they tried putting one foot in front of the other, but the disease sapped their ability to just keep going. They needed more than a voice of assurance and affirmation. Addiction was bigger than they were, and it stayed that way until the end for both of them.

SP: How did it feel once you were done with the climb and were back home?

EDIE: It felt great. I felt like I honored Billy and Eleanor. I beat back a little bit of sadness I carry about them. I conquered something in memory of them and for me.

SP: Was all the hard work, training, and grinding slowly up the side of a gigantic mountain, worth the effort?

EDIE: Yes, it was totally worth it, but I wouldn't do it again. There are lots of ways to fundraise; you don't have to climb Kilimanjaro.

I'm a big believer in fundraising for things that you feel passionately about. I think there are lots of ways to do it. You don't have to do it in a way that makes you wonder if you'll ever get to the end of the journey. I think we each find our own mountain to climb. Whatever it is. It could be a literal mountain. It can be any kind of an activity or a service. That's a very personal decision. 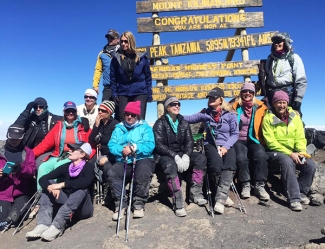 SP: You serve on the Shatterproof advisory board so you’re obviously a big supporter. What is Shatterproof doing that’s different from other organizations?

EDIE: I think Shatterproof is going to change the paradigm about addiction in this country and it must be changed. In our culture there’s a lot of, "Well, they [people suffering from addiction] should just change their behavior. They should just stop using."

Neither my brother nor my sister made a choice to have an addiction. We have to stop making moral judgments.  Those judgments also cause a lot of families to suffer in silence.  Shatterproof is working to eliminate the stigma associated with this disease. Gary Mendell’s (Shatterproof founder and CEO) analogies are right on the money; we don't tell a cancer patient that they just have to hit bottom. We don't tell someone who has heart disease that they should just go to meetings every Thursdays, sit in a circle, and share.

We need good treatment and we don't have that because there are too many erroneous assumptions about addiction. We need to agree that it's a disease like many other diseases, and then put money into evidence-based therapies. We have to allow people who are suffering to come out of the closet. And I think the whole paradigm of addiction: what it is, how to treat it, how to talk about it, the assumptions we make about people who use—all of that must change.

So, I am wildly supportive of Shatterproof’s efforts to do all of that. No other organization has really tried to tackle it in this way.

I think the conversation has to change and I really think people's default positions are going to need to be examined and uprooted. Shatterproof is trying to make that happen.