Fitness My Way Feature Story: Sam Pines—Steely Against the Odds 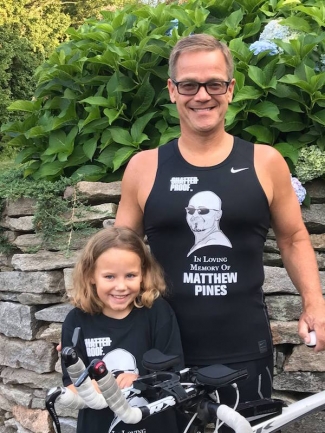 Sam is a gregarious business professional based in New England who lost his 33-year old son to a heroin overdose in 2016. Sam’s passion for fitness ignited during high school, and has continued ever since across a wide spectrum of activities including P90X, Pilates, cycling, and multiple IRONMAN triathlon events. He has taken his love for fitness and joined it with the love and memory of his son, Matthew, to benefit others by bringing awareness and much-needed funding to prevent and treat drug addiction in our nation.

Sam shares his thoughts on coping through fitness, about his son’s challenging journey through mental illness, and the unbelievable outpouring of response to his fundraising efforts. 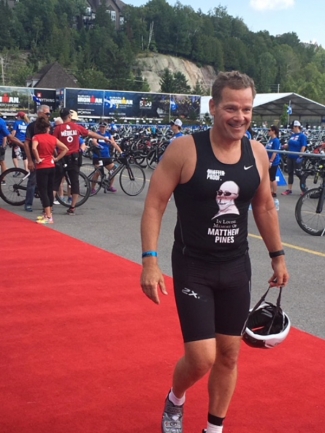 SP: Your inspiration for fundraising was in memory of your son, Matthew. Would you feel comfortable talking about where he was in your thoughts during the training process?

Sam: Once I decided the IRONMAN was going to be my outlet and started to train, Matthew was with me all the time—he was a driving force for me to wake up at 4:30 in the morning, and to do a 100-mile bike ride on a Saturday, and a 15-mile run on a Sunday. And just knowing that I was giving back for him, ultimately. That was a driver for me.

SP: Would you say fitness has played a role in coping with your loss?

Sam: Absolutely. Coping with the loss of a child is just indescribable. And sometimes it's not that you are trying to forget it, but it allows you to subconsciously process it, and deal with it, and feel good about yourself. Because after you lose your kid, you're trying to pull your life back together and give your own life meaning. I can remember times when I would just be peddling along and sobbing. The exercise helps. At least it helped me to develop the coping skills, even if it was, at times, just for the escape.

SP: I'm curious how you decided or learned that you could fundraise on behalf of Shatterproof through an external event. Can you tell us a little about that?

Sam: Gary [Mendell, Shatterproof CEO and founder] called me right after my son passed. He's such a loving and compassionate guy. He just makes you feel good. I remember saying to him, "I'm thinking about doing a triathlon in my son's memory, and raising some money through that avenue."

But at the time, the wounds were so fresh. I knew I had to do something to help bring peace, just for me. But I didn’t know what organization I wanted to support. After talking with more people at Shatterproof, I began to look around [at all the different addiction-focused nonprofits] because I really wanted to focus on the mental health aspect. The reason? My son didn't take drugs because he was happy. He suffered from depression. He died when he was 33, but at the age of 26 he was no longer on my insurance. The resources that he had available to him to try to deal with this mental illness that he had were very, very limited.

He was in and out of eight different rehabs. He had this amazing propensity to just pull his life back together. He'd come out of rehab having lost absolutely everything, and within three months he'd have a good job again. He'd be making money. He'd be building up his wardrobe. He'd have a place to live, and it was just incredible how quickly he would turn it around. But then, once he began to achieve any type of success, he would instantly crash and burn. We were lucky if he stayed sober for six months. 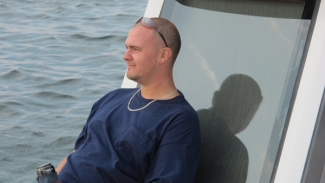 It was all because of his mental health. So I was looking for an organization to support that might really pursue the rehabilitation process, but I never really found anything until I encountered Shatterproof.

After Matthew passed, it took five months to determine Shatterproof was my charity of choice, then I had eight months to plan because I wanted to make my first solicitation on the first anniversary of his death.

SP: Despite recent breakthroughs that have proven it’s a disease, there’s still a deep stigma attached to addiction. How did you talk about this once you decided, "I'm going to do this event in memory of Matthew”? Were you nervous sharing?

Sam: It was interesting, because when he died and I was writing his eulogy, I did a lot of research online about opioid and heroin addiction, and statistics. I didn't really know up until that point that it was not an inner-city only problem. It affects every strata of our society, and the statistics were just staggering. Even though I knew my son was using, I just never really looked into it. I tried to help him, but I never really looked outside of how it affected him and the family.

So when I wrote the eulogy, it was the first time I opened my eyes to the enormity of this problem. And it's really interesting—no sooner did I lose my son then, all of a sudden, the opioid crisis became news. Since then, it's gotten a lot of national attention. If you as an American haven't been personally affected by this crisis, you know someone who has. That gave me the strength to be very open about it.

SP: What was the response from your friends and from your community when you first shared you were fundraising in memory of Matthew?

Sam: I posted to Facebook on the anniversary of my son's death. I had set a goal for $20,000. In less than two weeks, I was already approaching my goal.

Sam: Yeah. So I went back and changed it to $40,000, because I didn't want people to go on the site and see that I was approaching my goal, and not feel like they had to give!

I was very fortunate in that my son was really loved. He was such a great guy. He had a wonderful personality; was very gregarious and likable. He was always the center of attention. So when I posted, all of his friends and the people that knew him shared the post. And then everybody in my life did the same. It just shows you the power of social media. It's absolutely amazing.

SP: Were you shocked that you ended up raising so much? How did it feel?

Sam: Absolutely amazing on so many differently levels.

I have a best friend who’s a real mensch. He's involved in a lot of charity fundraisers, and he said to me, "You don't understand, Sam. We could have a committee of 10 people trying to raise money for such and such, and we have this whole big to-do, and maybe we raise $15,000. You're one person, by yourself, and you raised $40,000. That's unbelievable."

SP: It is unbelievable. What else did you do to promote fundraising? 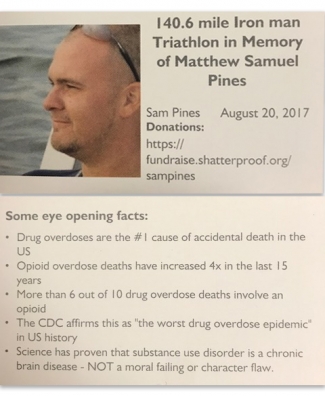 When speaking to people I would say, "I lost my son, and I’m running this IRONMAN and raising money." And they would typically say, "Oh, wow. I'd be interested in donating." And I'd reach into my pocket and hand them a card. It cost $50 to print those cards, and I don't know how much money I raised through them alone, but it was a lot more than $50.

SP: What would you say to somebody who has never done this before, who is nervous about sharing their story? What would you tell them about asking others to donate?

Sam: There were occasions that I had to ask, and oddly enough, those times were with the people closest to me. But generally speaking, all I did was tell the story, and then people gave. Maybe they had an attachment to the cause, to me, to my son, or to my family. I never really asked. I just shared. You just have to have the courage to share. And I would always just end with, "I hope you would consider contributing."

SP: Would you say sharing your story is your #1 fundraising tip?

Sam: Absolutely. That, and the power of social media. That piece of it really blew me away. If I hadn’t had the courage to share the story, I would have never gotten those donations.

SP: If someone was joining an existing fundraising event like IRONMAN, or creating one of their own, what 3 things should they focus on to drive success?

Sam: Get as much advice as you can, share as much as possible, and have a good story. I would say the same thing every time but with meaning, because it was my son.

Sam: I think it was kind of an evolution, honestly. I used pieces from my eulogy that I had written. You've just got to come up with something that is very natural for you, and from the heart.

SP: What would you say, why is it so important to raise funds for this cause on behalf of Shatterproof?

SP: Can you share a specific memory from the IRONMAN event? One that was totally unexpected, or deeply meaningful to you?

Sam: My wife surprised me. I had just spent six and a half hours on the bike, killing myself. And now I had to transition from bike gear to running gear. All of a sudden the announcer says, "…and Samuel Pines, who's running this race in memory of his son, Matthew Pines, who he lost to a heroin overdose this past April. He's raising money for Shatterproof.”

I just started bawling my eyes out. My wife had given the announcer the info. I didn't know, so it was completely unexpected for me, and just so emotional. 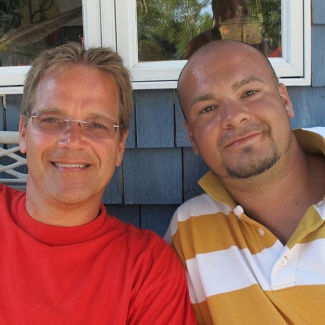 SP: Is there anything else that you want to add?

Sam: Matthew was such a good kid. Just loving and kind. I miss him. I'm so glad I did it [the fundraiser]. I'm so proud of what I accomplished. I know my son would be so proud of me, or is, if he knows. I feel like I made a meaningful contribution to his memory.