Naloxone is a safe medication that can reverse an opioid overdose in minutes. It should be widely available to everyone in the position to save a life.

In 2016, drug overdoses killed more Americans than car accidents, gun violence, and even breast cancer—making overdoses the leading cause of accidental death in the United States. 63,600 Americans died of a drug overdose in 2016—a 21% increase from the year before. And two-thirds of those deaths involved an opioid.1 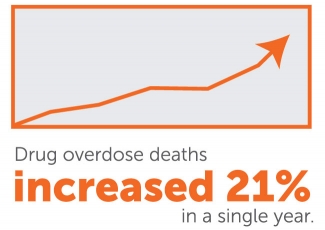 To combat the devastating effects of opioid overdose, many harm reduction programs have incorporated initiatives that promote the use of naloxone.

Naloxone is a medication that blocks opioid receptor sites to reverse the effects of an overdose and can be administered by nasal spray or injection into the muscle, under the skin, or intravenously.2 It has been approved by the FDA to prevent overdose involving opioids, including heroin and prescription painkillers.3 In some states, a prescription for naloxone is required, but others allow it to be sold over the counter.4

Policymakers and politicians are beginning to recognize the importance of harm reduction and the use of naloxone in the prevention of opioid overdose.

Naloxone access and training are a critical part of many harm reduction programs. By reversing overdoses and saving lives, naloxone gives those with substance use disorder another opportunity to learn to manage the disease.

Signs of an opioid overdose

Opioids affect the brain’s ability to regulate breathing.8 Using opioids in high levels can cause respiratory failure—which means breathing slows to the point that it stops, resulting in death.9 When someone is overdosing on opioids, they often exhibit some combination of three symptoms that the World Health Organization has named the “Opioid Overdose Triad”: pinpoint pupils, unconsciousness, and respiratory depression.10

Additional symptoms of opioid overdose may include:11

The sooner you recognize an opioid overdose and begin to treat it, the more likely your chances of reversing the effects and preventing death.12

What to do to reverse an overdose

As soon as you suspect someone has overdosed on opioids, call 911 to get help.13 If the person isn’t breathing, start CPR.14

The FDA has approved naloxone to prevent opioid overdose.15 If a naloxone kit or Narcan (the naloxone nasal spray) is available, administer it as soon as possible.

To use a naloxone auto-injection system like Evzio,16 remove the product from the packaging and firmly pull off the safety guard. Place the black end of the injector against the middle of the outer thigh of the person overdosing and hold it in place for five seconds. When it’s pressed, Evzio will click and hiss, which indicates it’s working correctly. After five seconds, the auto-injector needle will retract.

To use Narcan nasal spray, peel back the packaging and remove the product. Place two fingers on the nozzle and place your thumb on the plunger. Place the tip of the nozzle into the overdosing person’s nostril and press the plunger firmly to release the dose.17

After naloxone has been administered, continue CPR if necessary while waiting for the medication to kick in or for help to arrive.18 Naloxone wears off in 20-90 minutes, so it’s extremely important to get additional medical assistance to treat the overdose.

Get a comprehensive overview of naloxone and how to use the various products available.

From the World Health Organization19 to the White House,20 more and more policymakers are lending their support to making naloxone kits more accessible in the fight against opioid overdose. Research has shown that providing naloxone kits and minimal amounts of training to laypersons is effective at reducing deaths caused by overdose.21 One study showed that since 1996, nearly 26,500 opioid overdoses have been reversed thanks to the distribution of naloxone kits.22 These kits are also cost-effective23 and safe,24 and naloxone has been shown to have no potential for misuse.25

Naloxone kits are recommended for anyone who may be likely to witness an overdose, including friends and family members of those with opioid use disorders, first responders, law enforcement professionals, and other healthcare workers. Scotland, Ireland, and many states in the U.S. have policies of providing naloxone to anyone at risk of overdosing on opioids, as well as to those with a high probability of witnessing an overdose.26 Those who also participate in a naloxone training program are able to identify an overdose and respond,27 and minimal training of five to 10 minutes is needed.28

Every state has different laws about how naloxone can be dispensed. As of December 2016, 33 states and the District of Columbia allowed it to be sold by pharmacies without a prescription. Many states have also passed laws that exempt prescribers from any civil or criminal liability for prescribing, dispensing, or distributing naloxone, and 30 states have laws that exempt laypersons from civil or criminal liability when administering naloxone “in good faith.” Additionally, 37 states and the District of Columbia have “Good Samaritan” or “911 drug immunity” laws, which provide immunity from prosecution for drug possession or use when calling 911 or seeking follow-up care for an overdose.

What are the laws in your state?

For state-specific details about laws related to naloxone, visit the Policy Surveillance Program.

As of June 2014, there were at least 644 community-based programs in America that distributed naloxone to laypersons,29 including syringe exchanges, treatment facilities, primary care clinics, and pharmacies. These programs report nearly 26,500 overdose reversals between 1996 and 2014.30

There are naloxone programs run by law enforcement agencies in 29 states.31 In addition to saving lives, these programs have benefitted individual officers, who report feeling more satisfied with their ability to do something when they face an overdose, as well as the agencies overall, which report better community relations.32

The Bureau of Justice Assistance reports the success of several law enforcement agencies with naloxone programs.33 Since launching a law enforcement overdose reversal program in 2010, the Quincy Police Department in Massachusetts, for example, has reversed over 436 opioid overdoses. The Suffolk County Police Department in New York has over 1,300 certified officers who received training in the department’s Narcan program—and who have reversed 390 overdoses.

Similar success has been reported in programs around the world. Scotland’s National Naloxone Programme was associated with a 36% reduction in opioid-related deaths that occurred in the four weeks after a control group of prisoners with a history of drug use were released from prison.34 In its first 20 months, the British Columbia Naloxone Take Home Program reversed 85 overdoses.35 A New York City overdose prevention and naloxone administration training program reported an 83% success rate of people who survived when naloxone was administered.36

Since naloxone may be administered by other drug users in as many as 83% of cases37, many success stories go unheard and unreported. Clearly, when it comes to opioid overdose, naloxone is a powerful, necessary, and life-saving tool that plays an instrumental part in harm reduction.