The Affordable Care Act, sometimes called the ACA or Obamacare, was signed into law in March 2010.

The main goals of this law were to make health insurance coverage available to significantly more people and to support healthcare innovations that would lower overall costs.1

Over 20 million Americans have gained coverage because of the ACA. Thus, the share of Americans without health insurance is now at the lowest level in history.2 This bill also made important strides for substance use and mental health treatment, specifically.

The ACA requires all individual and small group market insurance plans to cover substance use disorders.

The ACA identifies substance use disorders and mental illness as essential health benefits, and requires all individual and small group market plans to offer coverage for these conditions. What’s more, the ACA built upon the Parity Act by extending federal parity protections to these plans as well.

Before the ACA was passed, more than a third of individual market polices did not cover treatment for substance use disorders (an estimated 34%), and about 18% didn’t cover mental health treatment. Now, plans are required by law to provide this coverage.3

For states that chose to participate, the ACA expanded Medicaid, allowing those states to:

The ACA has had positive results for people with behavioral health and substance use disorder needs.

Across the country, the share of hospitalizations of an uninsured person for a substance use or mental health disorder fell from 22% to about 14%.

In states that opted to expand Medicaid, the fall was even more impressive: going from 20% to just about 5%. 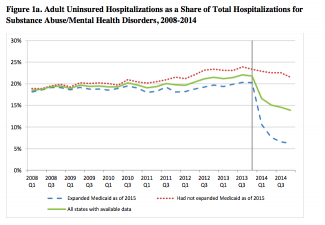 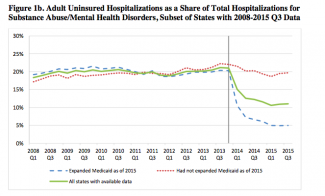 More ACA successes for substance use and behavioral health include:

Insurance coverage is an essential part of substance use disorder treatment.

Per the Department of Health and Human Services, all major progress in terms of substance use treatment depends upon "a base of health insurance coverage."

For people with substance use disorders, timely access to evidence-based treatment can literally be the difference between life and death. Without insurance coverage, people can’t access or can’t afford treatment. Without treatment, lives are lost.

Researchers estimate that more than four million Americans will lose access to substance use and behavioral health treatment if the Affordable Care Act is repealed without a replacement law that protects this essential insurance coverage.

And millions more would be at risk of missing out on future insurance coverage since addiction is considered a pre-existing condition.7

In fact, if the ACA is repealed without an adequate replacement law, the states with the highest drug overdose deaths—West Virginia, New Hampshire, and Kentucky—would see their uninsured rates nearly or more than triple.

What’s more, eliminating the ACA’s Medicaid expansion without a sufficient funding replacement would increase the treatment gap by over 50% and drain at least $5.5 billion a year from treatment for mental health and substance use disorders.8

In the midst of an addiction public health crisis, we can’t risk reversing the progress we’ve been able to make so far.

The ACA could definitely be improved.

The bill increased insurance coverage for millions of people, but there still isn’t enough treatment available to everyone who’s suffering from a substance use disorder. Roughly 420,000 Americans who need treatment for a substance use disorder don’t have access to it right now.9 Still, repealing the ACA without a sufficient replacement would increase that number to 640,000.

The new administration is working to repeal and replace the ACA.

Replacement bills are in the process of being written and reviewed. With the opioid epidemic showing no signs of slowing down, maintaining substance use insurance coverage is critical—no matter what happens to the ACA. Fortunately, the opioid epidemic is a bipartisan issue, with strong support for prevention, treatment and recovery programs on both sides of the aisle.

The nonpartisan Congressional Budget Office and Harvard-NYU researchers have found that the American Health Care Act, which was passed in May 2017 by the House, as well as the Better Care Reconciliation Act, which is currently being developed by the Senate, would result in millions of Americans losing access to insurance coverage—including families affected by substance use disorders. In addition, these bills make deep cuts to Medicaid that would have a devastating effect on every state, especially those hardest hit by the opioid epidemic. Finally, both these bills allow states to opt out of coverage for essential health benefits like substance use disorders, leaving many families without the insurance they need to get their loved one into treatment. Too many Americans currently go without treatment for a substance use disorder, but if either of these bills were to become law, those numbers would get even worse and hundreds of thousands of lives would be lost. In the midst of an addiction public health crisis, we can’t risk reversing the progress we’ve been able to make so far.

Shatterproof’s stance is simple: With or without the ACA, we need a healthcare law that protects insurance coverage for substance use and mental health disorders.

Whether the ACA is repealed completely or modified slightly, Shatterproof is advocating for this one main goal. The progress made by the ACA in terms of substance use and mental health must be maintained, no matter what happens to the law as a whole.

Shatterproof at the White House

President Trump's opioid commission asked for our recommendations. Here's what we submitted.