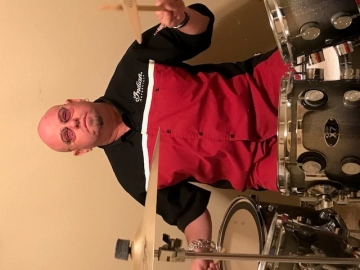 Addiction has touched my life on all levels: mentally, physically, spiritually, socially, professionally, and psychologically.

There is a solution. Are you willing to work for it?

I grew up in a Northwest suburb of Chicago, Glenview. I played hockey and began playing the drums when I was about 5, but got more serious about it at about 15. My mother was abusive, physically and verbally and I think, sexually, but I am not sure. I grew up with mixed messages from my mother, which added to the constant chaos in my mind. I was raised by my parents, who both enjoyed part taking of the herb. They were both successful in their work and all of their friends were of the same mindset. I thought it was normal for people to smoke marijuana. At 13, I smoked my first joint with a friend. I am pretty sure, I had a contact high before then. Alcohol use started at 15 years old and I drank until I threw up. This was the beginning of an illustrious career in drinking and drugging.
By the time I was 18, I had tried meth, cocaine, ecstasy, acid, mushrooms, etc. About the only 2 things I did not do was smoke crack or engage in IV drug use. I started drinking until I blacked out, by this time. I started collecting DWI's at 18 years old and by 33, had 3. I have been arrested for possession of a controlled substance, which was thrown out of court, assault with bodily injury, which was lowered to unlawful restraint and had really destroyed my life. I was a hair designer for 21 years, was married from 22-32 and was slowly killing myself. I had eventually got to the point that I was using and/or drinking on a daily basis and had become suicidal. I had given away my wife, son, career, my mind, my spirit and everything material that I had amassed over the years. I attempted suicide in October of 2002 and thought there was no way out. I had stopped the use of everything but alcohol at this point, but was drinking about 1/2 gallon per night. I would drink until I fell asleep and would drink more, if I woke up.
I had been sentenced to AA on all 3 of my DWI's, but never worked a program. I had been on and off probation from 18 years old and finally completed my last in about 2005. In February of 2003, I walked into the probation department, reeking of alcohol from the night before. I was finally given the option of treatment or prison. With a gentle nudge from Denton County Adult Probation, I entered a 90 day treatment, in Chilton, Texas. For the 1st time in my life, I actually wanted to quit and learn how to live happy. I began listening to what counselors and members of the 12 step community were trying to teach me. I began to believe there was a solution and I wanted more of it.
I completed 60 days of treatment as the funding ran out and we were advised we would be leaving the next day. For the 1st time in my life, I uttered the words, God, if it is your will, find me a place in Waco. All I knew of Waco at the time, was the Waco Kid from the movie, Blazing Saddles. I moved into a sober living house and slowly transitioned into a leadership role. I completed 6 months of outpatient treatment and counseling for childhood victims of abuse. I made my meetings, got a sponsor and finally became a part of the solution. I began a journey of recovery that included changing everything about me. I came to believe,\ the alcohol and the drugs, were just a symptom of the problem that was me.
At 39 years old, I returned to college. I was terrified, because I was told I had to take college level math. By the grace of God and a lot of studying, I made it through school with a 3.92 GPA, was Mental Health Student (Not Patient) of the year, a member of Phi Theta Kappa and graduated with High Honors. I currently work as a Licensed Chemical Dependency Counselor at Clear Springs Ranch, in Aquilla, Texas, which is just outside of Waco.
Oh, that sober living house, in Waco, Texas that I moved into after treatment...my wife of 7 years and I co-own and we house 12 men in recovery, that are all working a 12 step program and becoming productive members of society.
I am happy to say that I have lived 14 years of continuous contented recovery. I am no longer a slave to my addiction. I have surrendered to my disease and I have turned my will and my life over to a God of my understanding.
And the band played on.