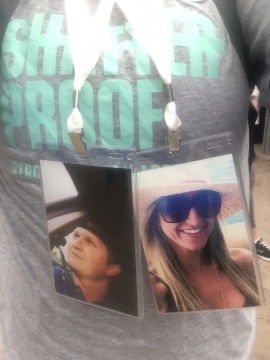 My addiction began when I was a senior in high school. It didn’t take long for mine to get out of control and start robbing me of a life I dreamed of as a 17 year old small town girl. In and out of detox centers and long term rehabilitation facilities all through my 18th year of life, I just couldn’t seem to accept that I had a real problem despite all that I had lost. My family’s trust and respect, jobs, college and most importantly I lost myself. I didn’t know who I was anymore. I struggled over the next 3 years attempting to stay on the right path but I never stuck with me. Until I found myself pregnant and alone. I stayed clean and sober throughout my pregnancy but soon after my daughter was born I was right back at it. I was sent to Florida to yet another rehab center and was not allowed to come back home to New Jersey per my family’s decision. So I completed my rehab and got into a halfway house. Despite being clean for about a month and a half I still had the isms that were deep within me and found myself getting into trouble for not following rules and moved from sober home to sober home. Finally I gave in and committed to attending one meeting a day, sometimes 2. I got a sponsor and I did something I never thought possible. I became willing enough to to truly be honest for the first time in my life. With my sponsor I dove into the Steps and began to not only see but feel change happening in my life. I started to love myself again and eventually found love with another recovering addict. We had two beautiful children together and got married, everything I’ve ever wanted in life.

9.5 years later something changed with my husband, he stopped doing the things he had been doing for the last 9 years and unfortunately relapsed. I tried helping him but as I was taught all the years in my meetings and readings, you can not save anyone from this disease. Our relationship was a real life roller coaster. Things got bad, really bad and I couldn’t be around him anymore no matter how much I loved him and how badly I wanted to be there with him. We separated and that’s when it really went downhill for him. I got him into two programs over the next year one in Florida and the other in California hoping that geographical change might help. But it didn’t. Finally things started to look as if he was getting back to the old Michael, the one I knew and fell in love with. We talked many times about rekindling our love and working on bringing our family back together. I was smiling again. We were going to be a family again. And all that came crashing down on the night of July 13, 2017.

Michael was living in a sober house up in Maryland in the town where he group up and all of his family still lived in. I was still in Florida working on getting things situated to move closer to him. Until that night when I received a call from his father to tell me “he’s gone”. Gone? No, nope, you got the wrong person. An accidental methadone overdose they called it. My world stopped my heart shattered into a million pieces. How can I go on? I’m going to die of a broken heart and that’s how I felt. What will I tell the kids? Daddy was their world, he was the best father when he was well. The love and bond they had was unbreakable. The services and funeral quickly came and went and I was as broken and shattered than I had ever been before. Paralyzed by pain and fear. I can’t do this alone. Happily ever after, too death do us part isn’t supposed to end before I even turned 30 years old. The days turned to weeks and weeks into months.

8.5 months later I get the call at work that my sister in law was found in her apartment gone from an overdose. Not again. Just stop please. Just a week and a half before her birthday. How do I explain this to my kids again?! To be a good mother while my heart was breaking was the hardest role I’ve ever had to play in life. But I had to be strong for my kids. They are so young still and pure. I pushed back every tear, every scream, every ounce of pain. That was until I was alone in the shower thats when it was safe to come pouring out. The one thing I can say through all this is somehow, someway I stayed clean and sober. Never touching a drug or picking up a drink even on those days and nights when I so badly wanted to because for that moment my pain would fade. But the blessing this program and my personal journey has taught me is the pain will always resurface the next morning, it will never go away. One day a time. Each and every day I will rise with the morning sun and fight through this terrible gut wrenching disease until the sun sets and I’m peacefully in my bed asleep. The dreams they come and they haunt me at times. But I can never forget that no matter how bad the pain gets and how much I feel like I’m dying inside without my husband, no drink or drug will ever bring him back to me, to us. Only if I take that first drink or drug, will it bring me to him, in death. And that’s not something I ever would want to put my kids through. So as in his life and now in his death my only hope is to help to spread awareness and end the stigma of addiction. Keep my husband and sister in laws memory alive through events such as Shatterproof and any other organization to bring light to this deadly disease we know as addiction.

Keep fighting. Raising and spreading awareness on this disease and fight to end the stigma that too many people associate with addiction. We are all someone’s child, brother, sister, husband or wife, loved one and friend. God bless!