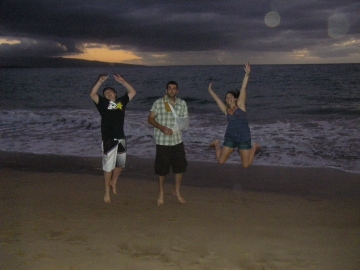 I found that I cannot handle the affects of addiction alone, I need support.

The photo I submitted with this story was taken in June 2010. These are my 3 beloved children named Paul-Michael, Anna and Alex. I was diagnosed with advanced breast cancer the previous June 2009, I promised my kids that when I finished my surgeries and treatments I would take them on a vacation to Hawaii to celebrate Anna's high school graduation. We excitedly anticipated this trip for about 10 months; it was the first that we had been on in years. The picture was taken on a beach in Maui during our vacation. It was absolute paradise.

Fast forward to Sept 2017. I have an incredibly joyously spirited, smart, beautiful 4 year old granddaughter named Addy Fay. Her Dad (my son P-M) has not had contact with her in over 4 months. P-M is 32 yrs old now and lives out of state and has been struggling with a heroin addiction for the last 7 years.

P-M's addiction began like so many other peoples addiction, prescription pain meds written and dispensed by irresponsible board certified medical "professionals" which exasperated his addictive tendencies and took control of his life. We have all been irreparably affected.

P-M broke his arm in multiple places, doing what he loved, motocross. He had a bad spill on his bike 2 days before our planned trip to Hawaii. The doctors suggested that he not go and that he would probably need surgery. As I said earlier, the previous year was challenging emotionally and physically for our whole family and this trip meant so much to all of us. I made the decision to postpone the surgery until we got back; the doctor reluctantly agreed and sent my son off to Hawaii with an ample supply of pain meds. His break was significant, my son carried on throughout the trip like a champ, taking his pain meds every few hours. 10 days later we arrived home and P-M scheduled his surgery. P-M's healing was challenging and painful, he dutifully swallowed the pain meds that he was prescribed. The pain lingered throughout physical therapy and beyond. During his recovery he became dependent on the feelings he had when on the pain meds. His need for the drugs became all consuming. When the prescription for pain meds was inaccessible, he chose alternate, cheaper, street drugs to give him the same high. P-M's drug of choice evolved to heroin.

I do not know if today my son is using or not, he stopped communicating with us. The addiction destroyed his marriage, home and job. I pray that he finds peace. I know his addiction is out of our hands. It's bigger than any of us.

We are a broken family; the affects that this disease has had on our family is indescribable, such sadness, such loss. We try day by day to find serenity and we struggle accepting what is.

I have learned so much in the past 7 years, the first 3 years I would cry myself to sleep every night praying that I wouldn't wake up because the pain was too great. I sought help and gratefully today, I have an incredible support system who helps me through each day. Little by little, one day at a time, I rediscovered hope and happiness in my days.