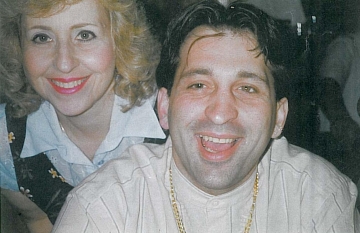 Living with an addict is not in any way like living with a loved one who has any other disease. You are constantly waiting for that "phone call." Your stomach is constantly in knots. Your heart is always pounding, while trying to keep a stiff upper lip. Your life is hell. However, while your loved one is alive there is always hope that he/she will turn around and stay sober. While they are sober everything seems fine. But in back of your mind you always wait for the other shoe to drop. That's what living with addiction is like.

There is still a tremendous stigma out there. There are still many idiots who think the addict can "choose." Some are prescribed pills, and so do not have a choice - ever. Some make that one decision and get hooked. Then they cannot choose anymore. This is a disease of the brain. This is genetic. People still don't realize that...they need to be educated!!

I had one child, a son. His name was George David Maras. We called him "Georgie." How do you explain so many years of turbulence in one short story? A broken home, a "deadbeat dad," a struggling single mom...the story is so repetitious, and yet, the story is mine. Georgie began drinking and smoking weed around 12 or 13 years of age. Before 14, a beebe gun accident shot out his left eye, and by 15 he became a hardcore cocaine addict. That was at the height of the cocaine explosion of the early 1980s. He entered his first rehab at 16, completed high school there and graduated there at 18, but after 6 months relapsed. This was his pattern his entire life until he died at 39. On and off. When he was not using drugs, he was wonderful - kind, loving, generous, great company to be around. When he was high and with bad company, I didn't know who he was. We argued so often, and I'd throw him out of the house. The drugs turned him into the devil himself! When he got into trouble I sent him out of the country, where he thrived for several years. However, he always returned and wound up in the same predicaments. As he got older, he realized how drugs were ruining his life. He wanted to stop. There were numerous rehabs, NA meetings, 30 days, 60 days, 90 days clean...but then relapse. There were serious accidents that almost killed him - a motorcycle accident, a car crash that caused a traumatic brain injury (TBI), which was the beginning of the end. He was in and out of hospitals and TBI facilities. He was diagnosed multiple times with bipolar disorder also, which exacerbated the addiction. I did research on his illnesses and stood by him through it all. Two months before his death he said to me in the hospital, "I threw my whole life away on drugs...25 years." Ma, you're my best friend...if you go, I go." A chill ran up my spine. After the hospital, he was sent once again to rehab, but the wrong facility. Instead of a rehab for "dual diagnosis" he was sent to one that could not treat his bipolar disorder. Instead of transferring him to the correct facility, they sent him home with strips of medications - unsupervised! Georgie died six days later in the living room while I was asleep. His tox report showed medications he had taken that were totally unnecessary, in addition to morphine and codeine which he must have copped from the street. The rehab refused to give me the name of the prescribing doctor, and in my grief I was too much in shock to fight them at the time.