Filling the other half of the glass 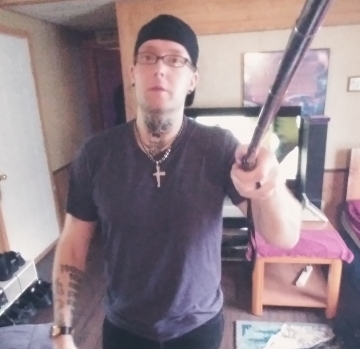 I am awake once more. My story began as many do with a simple prescription for oxy. To broaden the perspective, I grew up fairly normal in the 90s into the early 2000s. I was happy, good job, good relationship and a wonderful baby girl Keyera born 03/27/04. Not a bad way to live out your early 20s, until the storm clouds rolled in. She left, took the kid and most of the stuff, but all was not lost. I kept pushing along, working hard, always watching my daughter when asked. Eventually, I got hurt at work and was prescribed oxy for pain. Of course, it didn't take long to develop a habit, this was early 2008. By 2009 I was doing awful things to get what I thought I needed so badly. As the years passed I eventually got to smoking heroin and then shooting it. All the way until it even killed me on my birthday, I believe that was Nov, 2016. Not even that was the end but I was close to being locked up for many crimes I had done. I was on multiple police radars because I had run, on foot and in stolen cars, until 04/27/2018. At that point, I pretty much knew I was meant for something greater so I vowed to never fail again. Mind you at this point I was homeless, massively in debt with a 4xx credit score. I pled guilty right away so the judge gave me leniency, for which I am forever grateful. I did only 30 days, got out and started IOP the next day. Within a month I started working (still recovering from fractures in my back). Now 20 months later I have bank accounts, investments, my driver's license, full coverage insurance, 610 credit score, very little debt, a newish truck, enough saved for a down payment on a house (fingers crossed for this summer). Most important of all and why I decided to share my story is because on Monday 2/17/20 at noon I will be picking up my soon to be 16-year-old daughter for the 1st time in a very long time! I am here to say it's so worth it and it is so possible. When I began I thought it would take 10-15 years to get this far. I have been kicked off the proverbial horse so many times I lost count, but I kept getting back up! I have done all this by myself with no help from anyone and I love every minute of it!