The Greatest Generation: A Generative Heart 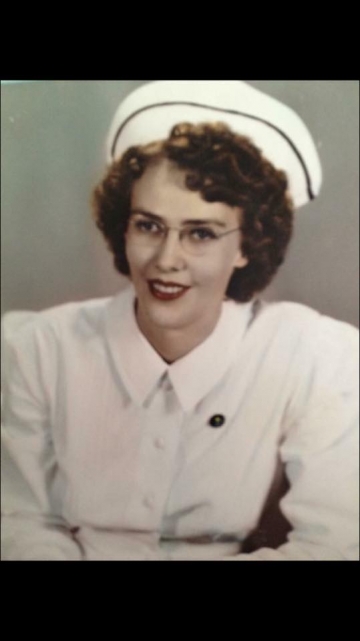 Hale, on May 21, 1926. She attended Roby High School and graduated, then attended nursing training at Hendrick's Memorial Hospital in Abilene, and became a cadet nurse in World War II. She served as a nurse at a POW camp in Abilene. After the war she went to work at a new Roby hospital in Roby, Texas and delivered the first babies to be born at the hospital, twins, one of whom was named for her. She moved to Snyder in 1963 and became a nurse at Cogdell Memorial Hospital in Snyder, Texas, where she worked for more than forty years, she helped deliver many babies, and helped a lot of people in pain. I saw her at the scene of a bad accident where we had just been driving by. She jumped out of the car, and attended to people who were covered with blood, as she soon was herself, she later was told if she had not been there the two people would not have survived the crash. She never told anyone about it, I just overheard them telling her.

She was probably the strongest person, I have ever known. She was tough, and she protected her family. My father was an alcoholic, but she treated him with dignity and helped him find the strength to overcome his addition, she did it for me, her son, because she wanted me to have a father in my life. Despite the hardship placed on her by his addiction, she was the family's rock, always there, while at the same time serving her community of fellow humans.

She passed away August 5, 2017 at the age of 91, in Dallas, Texas. She was funny and had a sharp wit to the end. I had the honor and privilege of spending her last day with her, she told me stories, and we laughed. I miss you mom, on this the first Mother's Day without you, I will spend the day reflecting on your life, Nona Jones , I will think of you, and hope that I can be as good a person as you were.