I miss my little brother 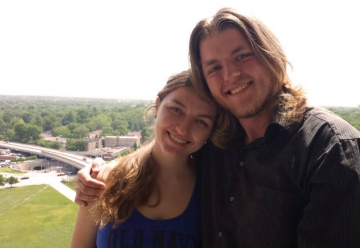 I lost my little brother to an overdose.

Change isn't easy and it doesn't happen overnight, but it's worth fighting for. If something as simple as sharing your story, sending an email or signing a petition can help just one other family, that's worth it to me.

I was on my way home from work when I first knew something was wrong. I had moved out of my mom’s house and into my first solo apartment about a month before, and my mom called me to ask me to stop by her house on my way home. It wasn’t totally unusual, but the weather forecast warned us of a blizzard. And I didn’t want to get caught in it, so I said no. But she insisted, uncharacteristically. I knew then that it was my brother John. That something had happened.

I still lost my legs and fell sobbing to the floor when my parents, staring intently at the ground, voiced all of our worst nightmares. John was dead. He had overdosed.

That night, I cried so hard that my face puffed up to twice its normal size. We couldn’t talk about the latest Seth Rogen movie, or go on a hike, eat too much at Chipotle, or text each other weird random memes. I couldn’t say goodbye. A loss like that takes your breath away. And it took away my desire to do anything but think about John and all the nevers.

At the time, I told myself that I could not have seen it coming. He was 21 and really only ever did recreational drugs. It’s not something they teach you in school—how to notice the subtle or even not so subtle behavior changes and one-track mindset that characterize a spiraling addiction. Instead, we pretend it’s not happening. We judge and call it weakness. We look down on those trying to seek help.

In my brother’s case, there were plenty of signs, and I’m guilty of ignoring all of them. My family all thought he would grow out of it. It was a phase. All 21 year-olds behaved that way. Looking back, I know better. Maybe there was nothing I could have said or done to change the outcome, but the organizations and treatment centers I know about now couldn’t have hurt. Hopefully, for someone else, it won’t be too late.

John was one of a kind. He’d hide things in odd places and laugh hysterically to himself until the person found whatever he’d hidden. I’m remembering a stretch of about three months where, whenever I couldn’t find my phone, I knew it would be in the medicine cabinet, and John would be peeking from behind his bedroom door. He loved to make people laugh (or laugh at his own jokes), and he had a calming way of making you feel like everything was going to be okay. The last time I saw him in person, he gave me a hug and told me he loved me. I was irritated because he’d ask me to drive him somewhere out of the way, and he didn’t want to leave the car on a sour note. Now, I’m so incredibly thankful for that small gesture and big heart of his.

It took me three years to write about that day, but I’m done being silent as so many others go through similar experiences. The number of opioid deaths is constantly rising, but there’s hope and help for others dealing with addiction. Organizations are answering the call to raise awareness and eliminate the stigma and shame that surround opioid addiction. Even as a family member, I'm able to feel the force of our country’s misinformed stigma against addiction. But Shatterproof is working toward real change and improvements in treatment, recovery, and support. And, in John’s name, I want to do my part to help them. With me?