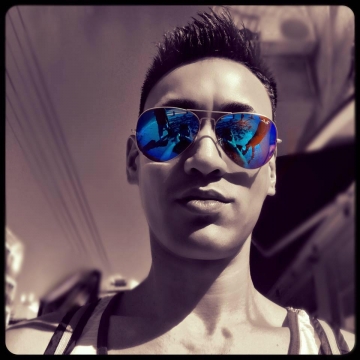 I was always a self-proclaimed over-achiever. I needed to get the best grades, be the best athlete, earn the most merit badges... inevitably when it comes to my story with addiction, if there was an award for being the Best Addict, I strived for it…

I started using, and then misusing, prescription Adderall when I was 18 years old. It helped me focus, work harder, ‘come out of my shell’ and feel more alive. When I went to college I had a short bout with cocaine, which I quickly chose to avoid because I could see myself becoming addicted and going down that infamous road that you heard people talk about or watched on LifeTime movies.

My Father passed away when I was 30 years old, his sudden death broke me. At that point in my life, I had a growing career with the Department of Education, two Post-Grad degrees, and was living in the city that never sleeps. I realized I couldn’t be more miserable. I abandoned my career, dove into the nightlife industry and saturated my sorrows with drugs. My addiction to Adderall turned into crystal meth alongside a slew of other ‘party-drugs.' The more I did, the less I felt... and I didn’t want to feel anything.

I felt like I was in control. I launched my own event production and promotion company, was finally able to spend time with my friends, and didn’t feel trapped working endless hours in a system that engulfed every part of my being. I soon realized, as most people who start their own companies, that money dries up quickly. I found myself broke and hungry with a growing drug addiction to feed, a new business I was determined to make a success, along with a new crew of ‘friends’ that depended on me to take care of their basic needs, especially their drug addictions. Refusing to admit defeat and go back to my old life or ask my family to help bail me out... I did what every rational addict would do: I started selling drugs to help support my own addiction while figuratively and literally feeding my friends’ as well.

At this point in my life, I would consider my dealing and addiction to go hand-in-hand. I was generating enough revenue to maintain my addiction, keep the business afloat and a roof over my head. It wasn’t until the news of my Mom being diagnosed with ovarian cancer for the second time, that all rules went out the window. I always said that when my Dad passed it was the darkest period of my life, what I did to my body I am not sure how I survived. When my Mom passes I’m pretty sure my life won’t go on. My Mom has been my best friend for as long as I can remember, I would DO ANYTHING for my Mom... and I did.

Over the course of the next year, my life was turned upside down. My Mom’s cancer spread, and with insufficient healthcare, so did her medical bills. I was in severe emotional and financial distress, so I did what I knew how to do the best. I used more and sold more. I couldn’t cope with the thought of losing my Mom or watching her suffer more because she couldn’t afford treatments or stay at home nurses. I escalated my dealing to support myself, my company, copious friends, an over the top addiction to drugs, but most of all to make sure that my Mom received the best care I could afford.

My Mom lost her battle to cancer on September 15th. After the services, I returned to NYC on September 22nd with a broken heart, at a financial low, and nowhere to turn. The drugs will always be there to catch you when you fall. I took every bit of money I had and invested it in dealing, I dove headfirst in my own addictions because I was running away from processing the passing of Mom. On September 26th, higher than I ever knew was possible, I reopened shop to dig myself out of the financial hole I found myself in. The first customers that afternoon ended up being 30 DEA Agents. I was arrested with the most amount of drugs that had ever been in my possession, at the height of my addiction to drugs, broken from the loss of my Mom.

Detoxing in jail is no joke. I was placed in a psychiatric cell because I began hallucinating and quite simply going NUTS. I was in that cell for nearly 3 weeks, being fed through a hole in the door, and not coming out to be able to shower or see the light of day. In hindsight, it was probably safer that way, I was out of my mind.

I spent the next 6 months in jail before I found a way to bail myself out. Part of my pre-trial release was to attend Drug and Mental Health Counseling coupled with regular drug screening. One thing is being clean and sober in jail, but it’s a whole other beast doing it in the ‘real world’. I had been high for over 17 years of my life. My motto was, ‘Why come down when you could do more.’ So, when I came out of jail I was at ground zero. I didn’t know how to live a sober lifestyle. My apartment was left in rubble, ransacked, all of my belongings taken by my ‘friends’. I had no money and no immediate means to make money. In the span of adulthood I made my money in 1 of 3 ways; working with children through the Department of Education, selling drugs, or producing and promoting parties. I certainly was in no condition to work with kids and selling drugs was the last thing I could do so I decided to begin throwing events again...sober.

How was I going to do this when I was just learning how to walk again sober let alone interact with hundreds of people in a drug-fueled environment? One minute at a time, one day at a time, one step at a time. Through counseling, finding sober allies, and reuniting with God, I was able to get my voice back and ease back into the event production business. I have found that dealing with addiction is a lifelong battle, which requires me to take care of me first for a change.

I still have to go back to court for sentencing but, I can say that maybe all of this happened for a reason. Maybe getting arrested saved my life. Everyone’s rock bottom is different and it is almost impossible to know you’re there while being high...for me, it took the federal government to tell me I hit rock bottom. I don’t wish detoxing in federal jail on anyone but it was a harsh wake-up call, one that I desperately needed. My story is far from over but for now all I can be worried about is today.

Think about today, not tomorrow and not yesterday.