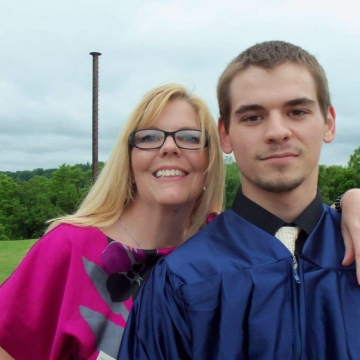 To put into words how and when our story began is a joy for me. I am a Momma to 5 beautiful children. Four boys and one girl. All who had my heart before I ever laid my eyes upon them. Each unique and beautiful in their own way. Each possessing a separate challenge to me as a parent on how to raise them properly so that they would have the best life possible.

My second child, my son Collin, was born September 15, 1994 just a little after midnight. He was bright and beautiful and special even in his first moments in this world. He was a sweet boy and played just like all little boys did. He loved baseball, football, skateboarding, fishing, biking, swimming, track, boxing, hunting, finding snakes, and turtles. He was so wonderful and larger than life.

He asked me all the what's and why's. The who's and when's. About Good and evil. God and Jesus. Where everything went wrong, well, I have many ideas and theories. My marital problems, an addict for a biological father, an adoptive father, and my list goes on.
He was about 12, hanging around with some questionable kids. He started smoking pot. I was in denial about the whole thing at first. By the time I realized that he was fully addicted to drugs and alcohol he was a junior in High School. He, of course, assured me that he was just like everyone else in school.

We started to urine test him. Groundings, counseling, threats of treatment, he would always pull it together. Or so we thought. By his senior year in high school I was finding empty bottles of alcohol in his room. Hits of acid were found on his bookshelf. So many Marijuana seeds in his carpet that when I went to sweep it, I thought they were BBs from his BB gun. I could have planted an entire field.

I was mortified, distraught, and extremely scared.

He had been taken to the hospital once for stitches during a drunken stupor and they kept him on the psych floor upon my insistence. I thought that if we could just convince him to get treatment for his addiction he would stand a fighting chance. He was so angry. I ruined his dreams of becoming a Marine. Becoming an underwater welder. That's all he could see. He couldn't see that the drugs and alcohol had stolen his opportunities.
It got to the boiling point... I had to do the one thing I thought would make him see. I made the decision to tell him to stop or leave. He was 18. He was still in high school. I thought he would stop...he chose to leave.

I was devastated. I knew that the road he was choosing to go down was long, Rocky, and full of horrible things.

Four years of watching him kill himself slowly and loving him every single moment. Telling him so every single chance that he would let me.

We had some very good moments in those 4 years. Some happy joyful and loving moments. There were also some very bad ones. The first time I learned of his heroin usage was one of the bad ones. I knew then that the road he was going down was a dark one. I begged him to stay away from that life and everything it entailed. Unfortunately by this point, my word carried no weight in his world. He had another woman in his life. The love of his life. They did everything together. Including use. That was a world that I couldn't compete in. I was an outsider now just watching. Watching my son die a little every day. One moment at a time. He would call me crying sometimes. Saying how much he loved me and how he wanted out. He would never equate his pain to his addiction though. He was confused. He was alone yet with someone he loved.

He would plan to leave and then run straight back. He did leave once only to go right back. Their addiction was as strong as the love that they shared. Until the addiction became stronger... my love is still stronger than any single addiction but it could not save him.

Heroin claimed the life of my beautiful son Collin Gregory Seagriff on November 23, 2016. I have spent almost every day since then Sharing our story. Sharing our love. Sharing education. Learning about the disease. Learning about the drug. Talking with other families. Talking with other addicts in Recovery. It doesn't take away or alleviate the pain of the loss of my son. What I hope to do is change the life of one person who is suffering. With God's help and love in my heart I know that it's possible to change the way the world looks at this epidemic and we as a whole can do what is necessary to make a difference.

I have a hole in my heart that nothing will ever fill. However, I have a love like every other single mother out there. A love for a son that may not be here physically but will remain with me long after I am gone. That love I will continue to share with anyone who needs it. One day at a time.

All My Big Love,
Collin's Momma