In Memory of MTS 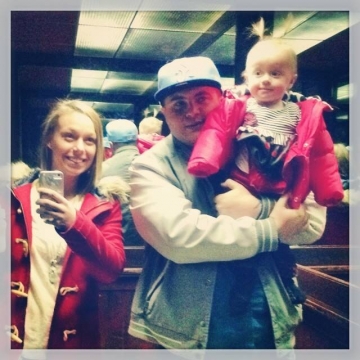 Addiction has been the plague that took the soul from my body.

I never thought I would be a single mom at 25. He didn't think it would kill him either.
My favorite person in this world is the little three and a half year old talking machine that is a spitting image of her father. She is so understanding and passive. She is queen of sweet talks and can debate her way into a second Hershey kiss because well, "she deserves it," and she does. August 29, 2015 was the worst day of my life. I was working downtown when I got a call from Michael's mother stating that I needed to come quick because Michael was found unconscious on the floor of his two-bedroom apartment in Kansas City, Missouri. I made it two miles on the road before I got the call that I needed to come grab my 2 1/2 year old because Michael was dead. I sped all the way up north doing about 100 mph until I pulled up and found Grandpa holding my child who was confused, hungry and happy to see me... You see, Michael was brought up in a home where dad did most of the work. His mother was a bipolar manic depressant who had a long-standing dependency with prescription drugs. Michael was just 12 when his mother gave him his first benzo. When you're young, you truly feel invincible, I can relate to that, what I couldn't relate to was that he would switch the word young, with high. When you're high, you truly feel invincible.. And he did, but he wasn't truly invincible. In fact, it was in that hour that he was high and all alone in an apartment with a child he was estranged from. You see, about 6 months prior to this, all three of us lived in our own home together with meals prepared by yours truly every night. We weren't the best financially but we made it work. We were a family and that is what mattered most. Michael had a long relationship with drugs. He had used pretty much the whole time we had been together. Michael, at the age of 22 had overdosed 4 times and visited 6 inpatient rehabilitation centers all across the country. When is enough, enough?

Well, the last time he got high was the last day he saw light and my world forever changed. I am now a single parent to an AMAZING 5 year old who just graduated pre-K and is planning to start her academic journey in the fall. I have went back to school myself and am working on a degree in graphic design. I am a student leader, student ambassador, student worker and the only student who serves on the student leader advisory council at my college, MCC-Maple Woods here in KC. I have learned to let go and let God plan out what is left in this world for us but we still have our days. Days when food doesn't sound good and sleep seems like a thing of the past. Often times I am reminded that I no longer have that person who understood me for all those years when no one else did. I miss my best friend who together, throughout the years have made all these memories, built all these "you wouldn't understand unless you were there" moments. I miss the guy who would play with his daughter at night, laughing at her cooing and gag every time she would toot. I miss my best friend, my partner. My heart longs for the day I can see him again. Rest In Peace MTS... if you could only see us now...