A mothers recovery, her sons death, and #Bandanas4Nate 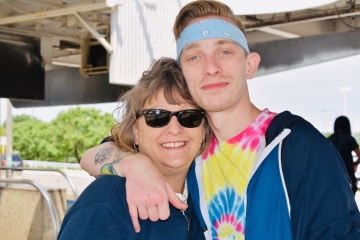 I started my voyage on drugs when my only child Nathan Daniel Jackson was about 7. I do not know why I tried Cocaine, but I did. It became out of hand when I turned 31. I then was arrested and sent to prison for 22 months and was released in 17 months and 9 days. My life changed so much. I had a lot to make up for with my baby. I had a wake-up call on 8/8/08 and never touched another drug. By the time my son was in high school, he was quite spoiled. Yep.... My guilt was killing me and I tried to make up for lost time and I wanted to show him how much I loved him. I wanted him to see that I changed and if you work hard you can get everything you lost back and more. I did just that and I made so many changes. I looked at life and people completely different. I became empathetic and helped everyone I could. Little did I know that Nathan started to smoke pot in his senior year (maybe in the end of his junior year) He graduated high school and moved in with his girlfriend. They began experimenting with some other drugs. His relationship with his girlfriend became volatile very quick and his nose was broken by her.
Fast forward another year and a half....Nathan started to change. He became angry and mean towards me and his girlfriend. I decided to move us to Missouri where my best friend lives. Soon after I realized my son had a problem with opiates and benzos. Apparently he instantly developed an addiction to benzos from the prescription our doctor gave him for his anxiety and the pills from his broken nose. It became heroin before I knew it. I sought out to learn all I could about heroin and all drugs so I could support him and help lead him to recovery. I sent him to 6 rehabs in 4 years. Three times the same rehab. That is where he established some serious bond with other clients and staff. I did everything and anything I could to help him. I supported him, loved him, and never gave up on him. We fought together and he truly fought for his life.
On 8/29/19, My best friend, the love of my life, and the man my life revolved around...
My beautiful son Nathan lost his battle of addiction. 😢
My life was shattered and I am not the same woman I was before.
He wore a bandana most days and that became his signature. His buddy from treatment called for everyone to honor Nate by wearing a bandana called it #Bandans4Nate and that is what went viral. I bet there was at least 50 people at his funeral just wearing a bandana not to mention the other 100 people or so who came to pay their respects. (he never believed that many people cared about him) They came from MO, NC, FL, CO, IL, and TX.
After his funeral I choose to create a fundraiser #Bandanas4Nate. I set out to help folks get into sober living, get to and from treatment, or stay in treatment. That is now my mission. Helping those who suffer from SUD while honoring my Nathan is all I have now. As of October 2020 I have helped 15 people and keep doing the fundraisers and will eventually turn this into a non profit organization. I have stayed sober all these years by being service to others.
But...through it all...I remained sober and am still alive (which is the hard part).
I am now right at 12 years and 2 months clean from all mind altering drugs.
Nathan loved hard. He spread love and kindness into this world and touched more lives then he ever knew.
At one time he did have 22 months of sobriety from the drug that killed him.
My life still revolves around Nathan Turkéy Jackson (His high school nickname 😂) and always will.
He was my Sweetpea! And.. You can definitely "Jot that Down!" ✍

Recovery is possible and wonderful.
Fight for your life because you are worth fighting for.
Be of service to others.
Spread love into the world.
Be the change you want to see.
I will love you till you can love yourself.
If you are struggling...Reach out. Its not too late as long as you have breath left in your body!
In a world you can be anything...be kind!
Stop the Stigma!