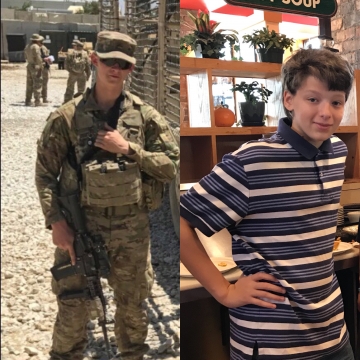 I didn't start using hard drugs until after both of my sons were born. After messy divorce from my oldest's father, moving back in with my disabled parents, and having a second child with a rebound relationship - I was primed for wanting to escape a life that I thought was a failure.

It was the typical "after school special" scenario. A little too much partying, not enough accountability. Cocaine started becoming a pretty regular party favor. It seemed like it happened all at once, but looking back, it was over the course of a few years. The boundaries started falling away. The things I said I'd never do, I did. Including crack cocaine. And once I started with that, there was no going back.

My oldest lived with his father most of the time, my youngest was a preschooler. And I was addicted to crack. My mother passed away in 2008, but I continued to be the caregiver for my disabled father. We needed each other. He needed my help with all physical tasks and I needed financial assistance. And with access to his money came more drugs.

I lied to everyone. Sleight of hand with money and bills, doing just enough to curb any inquiries from outside sources. And on the rare occasion there was any, I'd get angry and lie some more. If I was a drug addict, would the lights be on? Would my kids be fed? Would I still be "functional"? All deflection. I was a drug addict AND those other things were true.

For over a decade, I was heavily actively addicted. Towards the end, the utilities were shut off regularly. The house was filthy. I was doing the bare minimum and most times, not even that.

Dad went into facility care March 2017, the house was being foreclosed on. My oldest had graduated high school and gone off to the military. It was just my youngest and I. And the constant stream of drug dealers in the driveway.

I knew the date I had to be out of the house. And I knew if I survived until then, I could have a chance to free myself. I was still lying to everyone. Faking stability, but had isolated in a way that no one knew the depths of what was happening.

No one except my children.

The move out day came, and I used "one last time". We moved into a community-run subsidized housing complex.

I outed my addiction then, to anyone who would listen. Secrets only grow in the dark. I was actively addicted in secret for so many years. I could not possibly recover in secret.

I told my housing administrator, they hooked me up with outpatient rehab. And I told my family. My brother, who had gotten ahold of my Dad's finances when I moved. I had no other way to explain the reasons for the monies being gone and bills not paid. It was through his grace I am not in prison.

Dad passed away in August, a week before I entered intensive outpatient rehabilitation. He was too far gone to have been told everything, but he knew on some level throughout the years. We just had a dysfunctional, seemingly mutually beneficial relationship that really benefitted neither of us.

When you disclose the horrors of your actions and addiction, you risk losing people. And some people opted not to continue this part of my journey, which is their valid decision.

But my boys have chosen to remain my champions. My children are now nearly 20 and 14. Along with working a daily program of recovery, their grace has motivated me and humbled me every moment.

I acknowledge that their childhoods were not what they deserved and my mistakes were many, but we don't live in that. Not anymore. We live IN recovery, not regret.

My name is Chrystal, and I am a grateful and recovering addict. Clean from active addiction since June 30th, 2017.