What I Remember of My Mother 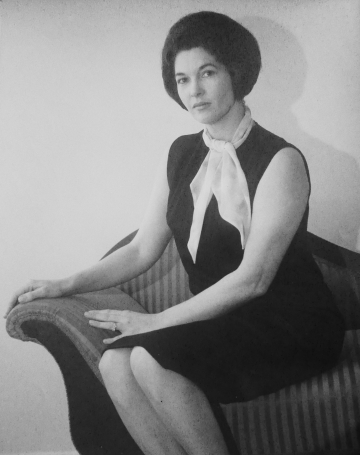 She passed when I was only 15. Sadly, I knew her worst, and very little of her best, so what good I remember is precious to me.

She loved flowers and trees.  Gardenias were her favorite. She gave her children seed packets and passed on her love of growing things. We always joke that although my father and brothers tilled the beds, my siblings and I planted, and my sister and I picked the vegetables, it was somehow our mother's garden. She liked giving orders.

She was president of every club she ever joined, including her chapter of the General Federation of Women's Clubs. She had been named "Outstanding Young Woman of Mississippi" in 1968, the year I was born. If you ever drive along Hwy. 90 between Gautier and Pascagoula, MS, know that she is the reason for the scenic view. Those lovely oaks gracing the highway were one of her many projects. She was a pillar of our community.

She would take us to the library and read "Yertle the Turtle" and "Mildred the Rain Cloud." She would entertain my friends and me by pretending to take off her thumb.  She would recite James Whitcomb Riley's poem, "Little Orphant Annie." I can still hear her saying, "And the goblins'll get you, If you don't watch out." It used to scare the bejeezus out of me.

She had a lovely voice, but would hardly ever sing.  Only at parties. Then you could count on her to entertain guests with a rendition of "Girl From Ipanema," or "Blue Moon."

Momma looked like a movie star when she was young. She wore red lipstick. "British Red Coat" was her shade. She taught me to roll my hair with socks.  She used to make me walk across the playroom with a book on my head. When she took group photographs, she didn't tell people to say, "Cheese."  She told them, "Say, 'Sex and Dirty Books!'" I didn't get why that was funny.

Whenever her nose tickled she would say, "Company's coming, or I'll be kissed by the fool." When I was terrified of thunderstorms, she would tell me not to worry, "It's just God and the angels bowling." She told me fairies lived inside bubbles and underneath mushrooms.

She had this sign in the kitchen that read, "Tomorrow, I am going to have a nervous breakdown. I've worked hard for it. I've earned it, and no one is going to deprive me of it." I can still hear her screaming like a banshee, "FRENCH [that was my father's name]! I'VE HAD IT UP TO MY EYEBALLS WITH THESE KIDS! I'M ON THE VERGE OF A NERVOUS BREAKDOWN!" It was a daily refrain.

In public, she would proclaim, "I've got six kids and we're not even Catholic," a line that never failed to draw a laugh. But at home - well - she would tell my sister and me how she never wanted all these kids. When I was little, she bragged to her friends about how smart I was, "She knows the names of all the dinosaurs and how to spell them, too."  In junior high, she told my friend Rebecca Crane how proud she was of me. She told me I was nothing.

My mother reared six children, but there were eight births. Her first child was stillborn. I was an identical twin, but my sister turned blue and died shortly after we were born. I don't think she ever got over that. It was a turning point. Binge drinking escalated into alcohol addiction, and she would eventually drink herself into an early grave.

She used to hide the bottles under the stairs or inside window seats. Bourbon, vodka, and gin - mostly gin. Gin drunks are mean drunks. "Go play in the traffic," was one of the nicer things she would say. Too young to know any better, I used to hunt for her liquor bottles and pour them down the drain. Of course she would become enraged. That's what people with addiction do. "Go to Hell and F*#k the Devil!" is something no child should ever have to hear from anyone, much less her mother, but I did. Regularly.

Her death was slow and agonizing. Distended belly the first sign, then jaundice came. She tried once to get well. When the liver disease hit, it was suddenly real. I knew her sober only once - for a couple of months when I was in ninth grade.  And then she got sick again.

I remember that spring break vacation - when we were at a Holiday Inn in Tallahassee, and she was shaking so hard she spilled tomato juice all over the table. I remember being so angry at Daddy for buying her a beer.  I'll never forget how he bellowed at me, "Have you seen her when she's got the DT's and she's talking to people who aren't there!?!  Well, I have..."

A year later, she got deathly ill again. I remember going to the psych ward in December. I can't recall if she was home for Christmas. She didn't even try to stay sober that time. She just got sicker and sicker. The jaundice worsened, and her ability to make platelets was being destroyed.  She couldn't clot, so she was always bruised. Small cuts would bleed for hours from her nose, her lips, her ears. I wished she would just die and get it over with.

And yet, she persisted with her women's club work. In addition to beautification projects, my mother had been instrumental in founding our local Festival of the Arts.  She used to produce a children's art show that was open to every single child in Jackson County, Mississippi.  The Clothesline Art Show was her pet project. Art work would be collected from every single public, private, and parochial school in the county to be hung up on clothesline in the park for everyone to enjoy.  It was a huge undertaking. And when that last piece of art was delivered back to the last school...Well, then she went to the hospital for the last time.

This time, she really wanted to get well, but her body was too far gone.  Our last Mother's Day together, she tried so hard to stand up to greet my sister and me. She was shaking, and her eyes looked so frightened... She never left that bed.

And yet, a miracle happened not long before she died. She called home looking for Daddy, and I had to tell her he was in Canada on business. She broke down and cried.  She told me how sorry she was to have been such a bad mother. Through my own tears, I told her I was sorry, too, and that I knew she was sick and I wished I had been more understanding.  Momma promised me that when she got out, we would be "a mother/daughter team."  We never got that chance, well not while she was still on this Earth.

Three years ago on Mother's Day, my elder son was in residential treatment and couldn't call me due to a rules violation. As I rested in my backyard hammock doing my best to find some peace about the situation, I swear I could hear my mother saying, "You tell them Gay, Jr.  You tell them what it's really like. Tell them the truth..." And so I have.  And so I do.

On May 1, 2017, I participated in a West Palm Beach rally calling on Florida's Governor Rick Scott to declare a state of emergency to address the addiction and overdose crisis that is claiming over twelve Floridians each day. Taking a page from my mother's book, we hung over two hundred purple memorial banners on clothesline. The flags were inscribed with names and remembrances of people who had died from substance passings.  As I tidied up at the end of the rally, I saw a banner flying down the sidewalk, so I went to retrieve it.  It was the one I had made for my mother. "Gay Williams Caldwell -  Glamourous, Audacious, Determined."  I knew she was with me, and I knew our efforts would not be in vain.  Two days later, Gov. Scott finally declared a public health emergency to address the overdose crisis.  I could not be more proud to be my mother's daughter.  She is in everything I do.