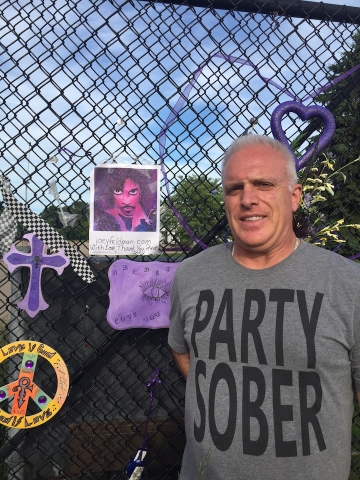 On October 7, 2007 I was laying in the emergency room out of answers. Alcohol and drugs were killing me, and I had just been revived from an overdose from heroin. I went from the emergency room to a two week stay in the psych ward, to a three month stay at a recovery center.

My life was a mess when I arrived. I had been fired, my wife had filed for divorce, I was facing child custody hearings. I drank and used for over 30 years. I had never tried to quit and, truthfully, had I not been locked in a psych ward and then a recovery center I probably would have ran.

For some reason I listened to what was said at the recovery center as I knew I had no answers. I had so many outside issues going on it was difficult to stay present. I was encouraged to carry on and that I had to put my sobriety first or there was no way to handle the issues. When a plan was being written for me to transition from inpatient to outpatient I was encouraged to attend a meeting the day I left and to find a sponsor. To this day I do not know why but I went and I found my first sponsor. I did 90 meetings in 90 days while continuing with the outpatient program. I got my first sober job at a produce company which was run by a guy in the program. Although certainly not the white collar job I was accustomed to but it was a start. I was going to meetings, working the steps; living in sober living, working, and life was getting better.

On July 3, 2008 before sunrise I was woken up by the sound of my bedroom door being kicked open and LAPD was paying me a visit. I would not come home until August of 2010. I spent 9 months in LA County Jail. With the help of people in the program, I got placed in a drug and alcohol program while in LA County Jail. In prison I helped get AA going in the facility I was in. By the time I got out I was almost 3 years sober and had never celebrated a birthday on the street.

The day after I got out I went to the same meeting I had gone to after I got out of the recovery center. I was welcomed back. I kept going to those meetings even though life was challenging. Through a series of events I ended up in sober living, broke and unemployed. I contacted the man who gave me a job at the produce company and he told me to come to work the next day. It then dawned on me that I was in sober living in Santa Monica and my new job was past downtown and I had no car. For almost a year I rode the bus 6 days a week for two hours each way. I did not realize at the time I was being taught humility and how to show up no matter what.

Five years later I am still working at the produce company and I am part of the management team. I am so grateful for the lessons my boss, his controller and others in the program have taught me on how to be a man, an honest employee, a father and a solid partner for my fiancé. I have learned that nothing must come before my sobriety and I do all I can to stay in the middle of AA, stay sober and help others.

PRC provided a caring and safe environment for me to develop a solid foundation I could take out into the world. Sobriety has not always been easy and I have faced many life challenges. Today I have no secrets and I am not running from anyone. I strive to do the best that I can and stay out of the results and I take one day at a time.

I have 8 1/2 years in recovery, one day at a time, and I am forever grateful.