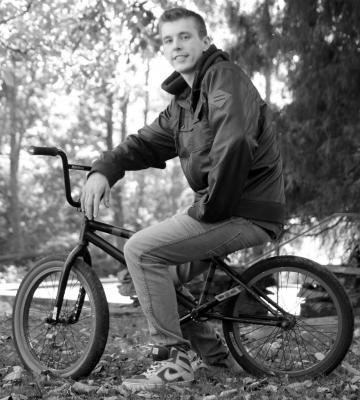 Throughout the progression of his disease, Em sold almost all of his personal possessions, and those not worth any money were essentially discarded.

Bookmark this
Photo submitted by
Aimee D'Arpino
Tell us about your loved one.

Emmett was a 20-year-old college sophomore studying computer science on a full academic scholarship. He had an amazing spirit – with an infectious smile that could just light up a room. I can’t even begin to tell you about him in three minutes - but bottom line – Emmett was the average American teen. He loved video games, hanging out with his friends and BMX biking. Em was an accomplished student, graduating high school as a member of the NHS (and a 4.27 GPA which he loved to brag about). He was the best big brother that his 9-year-old sister could ever ask for – often spending hours bouncing on the trampoline and mastering new “tricks” with her. He enjoyed spending time with his father and 18-year-old brother – watching movies, going to football games, hanging at their lake house in Maine. He was that polite, respectful young man that you wanted your daughter to bring home. Until Heroin found him.

Tell us about Emmett's struggle with addiction

Within 6 weeks of beginning college, Heroin found my son Emmett and for lack of any better word, he became enslaved by this drug. It dictated how his money was spent, how his time was spent, even when he saw his family & friends – Em was no longer a free person. As parents, we did EVERYTHING in our power to help our son –unfortunately, because he was 18yrs old and still living what appeared to be a “normal” life to outsiders (great grades, never in trouble with the law, no threats of violence) our options was extremely limited. Beyond two “spin-dry” detox stays (the second of which Em signed himself out of early), treatment wasn’t deemed “medically necessary” by our insurance company – and the $30,000 price tag was financially prohibitive for our family. And so this horrible dance with the dragon continued – Emmett lied, he stole, he manipulated those around him – worst of all he shut out his father & I – I knew in my heart that this wasn’t MY son, this was his disease. Heroin had found him…and within 18 short months…it killed him.

What do you miss most about Emmett?

Throughout the progression of his disease, Em sold almost all of his personal possessions, and those not worth any money were essentially discarded. Three things he held on to – his prized BMX bike that he had built and re-built numerous times over the years – a wonderful reminder of hours spent with his best friends, and two framed photographs – one of he and his sister, Alice (the love between them just radiating out through their smiles) and one old photograph of he and I – he must have been just 4 or 5. The frame of the photo contains the beginning lines to the song “You are my Sunshine” – a song I sang to him frequently as a child. Emmett will forever be my sunshine – and no matter how grey the skies, I will work to shine his light into the lives of others.