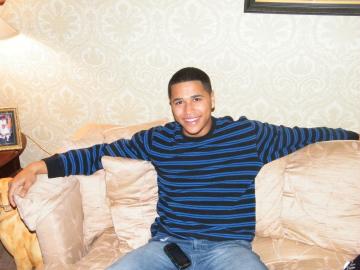 Everything ! But mostly his smile, his quirky laugh and his genuine care for others, beyond himself, especially the underdog. RIP Geoffrey Michael Pierce, you are missed beyond what words can even begin to describe. We love you son - Dad & Mom.

Bookmark this
Photo submitted by
Byron C. Pierce
Tell us about your loved one.

Geoff loved baseball, and was a co-captain of his high school baseball team as well as a member of Bristol American Legion Post 2. Geoff continued to be involved in sports after college as a member of the Bristol Greeners and played on several local slow-pitch softball teams. Geoff was also a natural performer who had a knack for imitation, whether it is impersonations or his ear for music and song. Along with his charismatic personality and contagious smile that would light up a room, anyone who knew him could sense his genuineness. Geoff always gave his undivided attention to a person, even if it was a stupid joke or you needed someone to talk to or needed advice. His keenness to your feelings made you feel special and valuable.

Tell us about Geoffrey's struggle with addiction

Geoffrey struggled with addiction for many years, more than his parents had known. But his most intense struggle was probably in the past 3 - 4 years. I honestly think he was masking some deep depression/pain combined with his inability to really cope with just 'life in general'. When we were together recently driving back from Florida (where he'd spent nearly 18 months in and out of rehab facilities), he shared with me how it all started, pills. He knew that cocaine could get him into 'trouble', but he just didn't think that abusing pills would. Once they became too expensive he resorted to heroin. He OD'd once that we know of when he returned home briefly in 2014 on his birthday and was revived with shots of narcan. He said due to that near death experience he was done. Obviously the gripe of his addiction was too tight. Shortly after Christmas 2015 he told his Mom & I he wanted to come home, so I flew to Florida on January 11th and we drove his car back, arriving home on the 12th. During the drive he said one of the many reasons he wanted to be back home (aside from missing family and friends) was he got tired of losing people he'd gotten close to. He counted 15 in the time he was there that had died from overdose. Five days later his Mom found him in his room.

What made Geoffrey smile?

Being with his family, especially his cousins, and his friends. He loved children too, and had this incredible knack for relating well to them. Movies, he LOVED movies and he could easily recite a line or scene from the hundreds of movies he'd seen. Our family dog Bailey, a beautiful and loving Goldendoodle.

What do you miss most about Geoffrey?

Everything ! But mostly his smile, his quirky laugh and his genuine care for others, beyond himself, especially the underdog. RIP Geoffrey Michael Pierce, you are missed beyond what words can even begin to describe. We love you son - Dad & Mom.