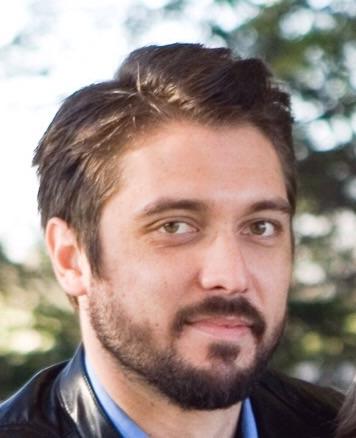 I miss his company. It didn't take much to enjoy time with Mark, we could enjoy the simplest of things. I miss seeing him with our son, he was so involved and engaged. I miss his logical conversations when I came home ranting after work. I miss how much he loved me, even when I worried that I was just the grossest woman that gained baby weight, smelled after work or whined too much, he loved me and showed it. I just miss him, all of him.

Bookmark this
Photo submitted by
Kirsten Stone
Tell us about your loved one.

It is so hard to write about Mark, because feeling him was so much better. He was a handsome, charismatic man. I couldn't take my eyes off of him. He was a risky man, full of adventure and surprise. He was a loving man, and he made sure you knew how much he loved you through his loyalty, time and words. When our son, Maxwell, was born I watched this man become a father. He was so maternal in instinct. Whenever Maxwell moved, so did Mark - it's like they were magnetic. I couldn't believe the role that Mark had organically fallen into when Maxwell came into our lives. I still to this day wonder if I'll ever be as good of a mom as Mark was a father to our precious child. I feel so privileged to have known Mark, and to have been his wife. We were both such selfish people when we met, it's a surprise we were able to maintain a relationship, let alone turn it into a life and marriage. He made me a happy, loyal, selfless wife, and I made him a generous, loving, caring husband. We made it work through some really awesome times and some really trying realities. He has left such a void in so many hearts. So many people never knew how much my husband struggled with pain, anxiety and ultimately addiction. He wore nothing on his sleeve -whether he saw it as weakness or just didn't want to burden others, I'll never know. What I do know, is that Mark's death has awakened the minds of his loved ones. His death has opened a door to this epidemic that most people he knew weren't exposed to or were in great denial. Mark alive, made a big impact, and I will make sure Mark's death makes a big impact as well. He wanted to help people that struggled in their path to recovery and I will make sure he still can.

Tell us about Mark's struggle with addiction

As with most stories, it's hard to pinpoint when Mark's struggle began. Mark struggled with his health the entirety of his life - one issue after another. To sit down and really remember what all he had to deal with physically, is extremely heartbreaking. Knowing he had to tolerate so many physical issues daily, is exhausting, yet you would have never known just looking at him. Mark was pretty heavy into marijuanna in high school and a list of other typical drugs you'd see in his hometown. But, when we met he was an occasional drinker with a laundry list of medical conditions that led to a massive bowel surgery just 4 months before we met. Fast forward 2 years - Mark came to his mother and I, describing his feelings of addiction to his pain pills that he was being prescribed before during and after multiple bowel obstructions, another bowel surgery and an aneurysm correction/surgery. He immediately left for rehab after his confession. It was a relief to Mark's mother and I when he confessed because we knew he was acting differently but could have never imagined what Mark was struggling with. The next two years of our lives are such a whirlwind, it's hard to remember the order of events... Almost two years to the month that Mark came to his mother and I, to open up about his struggle, he died of a heroin overdose in a hotel room a mile from our home. Three rehabs, one intervention, tons of counseling (family and separate), hundreds of NA and Nar-Anon meetings, suboxone, guilt, bribing, loving, caring, talking, tough-love, begging, praying, threatening, and bargaining could not rid Mark of his addiction. He wanted to live a sober, long life with Maxwell, I and our families but heroin had a different plan for us all. There is still so much we don't understand about addiction but I do know this. I'm proud of my husband - I'm not ashamed or embarrassed, but he died full of shame, and guilt. This must change, our hearts must be opened.

What made Mark smile?

Mark loved our son so much. You rarely got to see a panoramic view of all his beautiful teeth - but for our son. He was the best man he could be for Maxwell, all smiles. Mark also loved a good, inappropriate joke/conversation. You could hear him laughing in a room full of very uncomfortable people - knowing he didn't care if anyone was offended, it was funny regardless.

What do you miss most about Mark?

I miss his company. It didn't take much to enjoy time with Mark, we could enjoy the simplest of things. I miss seeing him with our son, he was so involved and engaged. I miss his logical conversations when I came home ranting after work. I miss how much he loved me, even when I worried that I was just the grossest woman that gained baby weight, smelled after work or whined too much, he loved me and showed it. I just miss him, all of him.