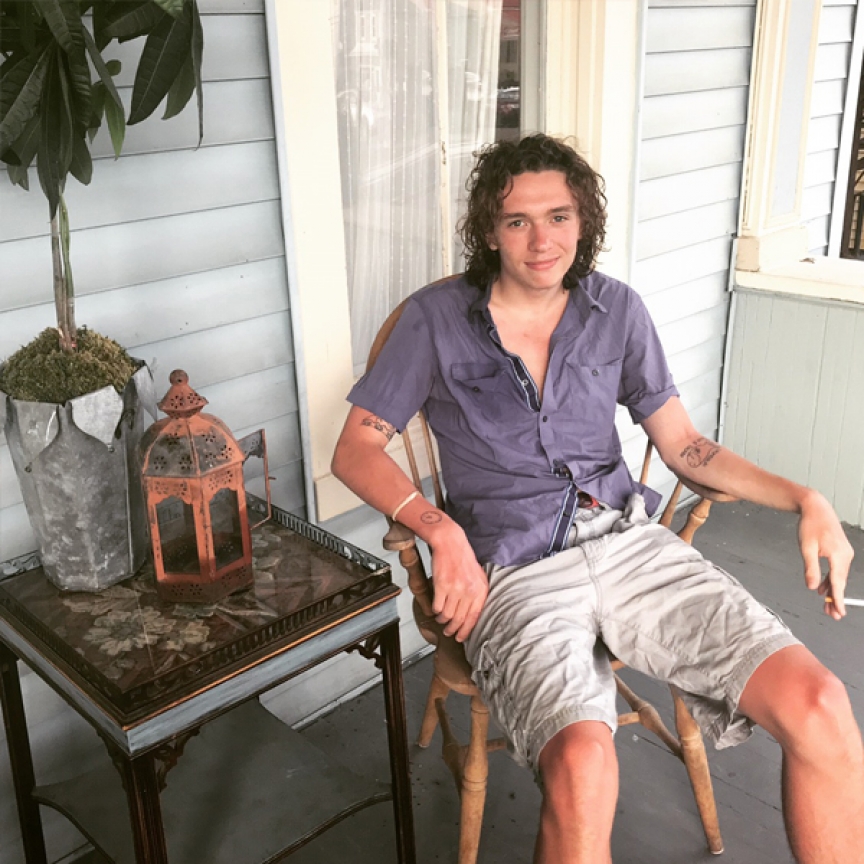 "He’s so effing rock star. Oh, the whole vibe. He’s so brilliant. I can’t say was, Danny is too effervescent and present."

"Dan was a lively, brilliant, precocious, hilarious companion. My kids instantly and adoringly attached to him, and he and my oldest Ben became a comedy duo and partners in crime. He was always entertaining us, always thinking up innovative and zany ways to undertake the simplest of tasks. Super inventive, he provided witty storylines for the infamous Pig cartoon series (best described as Viz meets Freddy Krueger). Dan starred in the Danabelle Show, in which he was fluent when interviewed on a range of nonsensical topics. Playing Consequences each night camping in Maine, he had us screaming with laughter. I have really struggled to think of examples of any of this that are polite enough to share. But the tales of our time together grew bigger with each retelling — narrow escapes from Russian terrorist snorkelers, the boulder-throwing baby, the elderly landlady's curse."

"I miss his encyclopedic knowledge of every player in the Premier league and how he fully indulged my observations about players' hairstyles and tattoos. Together we would imagine what they were like off the pitch. Danny's imagination had that wonderful ability to take a yarn and run with it."

"Adventure Bus Danny — such a bright light! This is how I will always think of him."

"Whenever we walked around in public, he used to scream, 'I love my girlfriend!!!' at the top of his lungs. Everyone would always turn their head and I’d be laughing and blushing. Danny loved to be loud and his authentic spunky self. Whenever he’d sing along to London Calling by the Clash, he’d turn on his cute British accent and belt it out. We used to climb up to the rooftop and sing and dance to our songs. They were Suzanne by Leonard Cohen, Die for You by The Weeknd and Young and Beautiful by Lana del Rey. We slow danced, rocked out, played air guitar, and held hands as we’d sing 'I would dieeee for youuuuuuu' and 'Will you still love me when I’m no longer young and beautiful? I know youuuuu willlll.' "

"Those gorgeous blond curls and a wee boy who just couldn’t stop kissing his beloved mum. Giggling away. The joy between you both. An infinite connection. A spirit so large, and oh that grin."

"He was little — maybe in Martha’s Vineyard, 2001? And we went for pizza. We looked around and the pizza topping had all gone leaving only the base smeared with tomato. And Wubby with a look in his face as if to say 'what pizza?' He’d basically sucked it all up like a hoover."

"In theater class, the teacher gave Danny an extraordinary compliment, saying he reminded him of Robin Williams."

"I always adored Danny and have so many positive images of him… his bouncing a ball off my wall repeatedly, his cuddling next to you on the couch, his wit and infectious smile… all admidst his struggle to sort things out when he was a young teen. So so bright. So so deserving of a good life."

"I was always awestruck by the depth of our conversations and the maturity Danny demonstrated. I don’t think I’ve known a high school senior so devoted to and respectful of his girlfriend than Danny. It was such an honor to work with Danny and to have a relationship with him and witness his gifts first hand. He was a special, special guy and I’m so very sorry the world won’t have the chance to benefit from his very bright light."

"My most vivid memory of him was at a soccer game; you yelled from the sidelines that he needed to score a goal if he wanted dinner that night and he scored! I remember his bright face looking at you with victory. Oh he was so cute."

"Danny demonstrated a sense of humility that I so admired. Danny never understood bravado, showmanship and adolescent drama. I sometimes thought he was too special and unique for this place. Danny had a compassionate heart. He didn’t judge – and I think he often struggled with why the world around him wouldn’t simply apply this same way of thinking. He’d say, 'You know what I don’t get Mr. D…,' and I would listen and simply think, 'Yeah I hear ya, bud.' And that time spent with Danny and listening to his pearls often made me stop and shift my thinking. Danny had an impact on people – if you were listening."

"When I tried to put Danny in his pack-and-play to sleep he stood in his jammies saying, 'No thank you!' Over and over!! In his little English accent. It certainly worked on me. ❤️❤️"

"I remember him telling me all about reading Freakonomics when he was like 10-12? And I was totally blown away and had no idea what he was talking about."

"When you guys stayed with us in London, maybe about 6 or 7 years ago, he really bonded with Orla making pretend spears and knives in the garden from bits of wood and string. Also he explained the American school system to Orla and rounded off with, 'And then when you're 18 you go to university... or prison.' Always that wicked sense of humour."

"I loved it when he went hiking with us. Even though he had never been on the trails, he was so eager to see everything that he had to lead. His enthusiasm was contagious. Always a smile on his face, like he had just discovered a wonderful secret."

"From the first time we met Danny (a decade ago) we all fell in love with this bright, sparkling, wacky little guy. Whether hiking, running around on a field, or just hanging out eating pizza on our special Tuesday evenings, Danny always made us laugh."

"That Christmas, I remember him almost passing out with excitement at getting his Big Blue Gordon toy train, and how even though he was only toddling, he was already making up stories — with sound effects! — about his toys and their adventures."

"1. Baking a Mother's Day cake with him to give to you. He was both excited and nervous, and the batter was both lumpy and delicious. He decorated the entire thing himself, and I let my perfectionism go. I don't know if he'd ever baked a cake from scratch before, and I felt honored to do that with him. 2. His witty commentary during our viewings of The Bachelorette. I suspect he enjoyed those episodes as much as we did. He was quippy and sarcastic, much like his mom, and it was such a delight to see his personality come through. <3"

"I remember teaching him crazy dance moves in your living room under the guise that they were soccer exercises. He was so much fun and so great to be with."

"Just so many happy memories of our Yorkshire mini break: ‘Big Boy’ Danny clambering over rocks in his flip flops while you looked on half-amazed, half-terrified. Fun chats about life the world and all over our dinner and outings to sweet shops. He was also exceptionally sweet with Connie 💓."

"A few years ago Danny spent the weekend with us. We were watching a movie one night and the sound track was cool enough for us to watch the never-ending credits that roll at the end of the film: grip, assistant to the director's assistant, and on and on. I said to Danny something like: 'I wonder who pours the coffee for the assistant to the caterer?' And we were off and running. Danny came back with something like: 'How about the cream pourer, and the sugar spooner?' We were punch trunk when we finally exhausted the subject and ourselves."

Submitted by: Lucy Berrington To edit this memorial, please contact us at info@shatterproof.org or 800-597-2557.