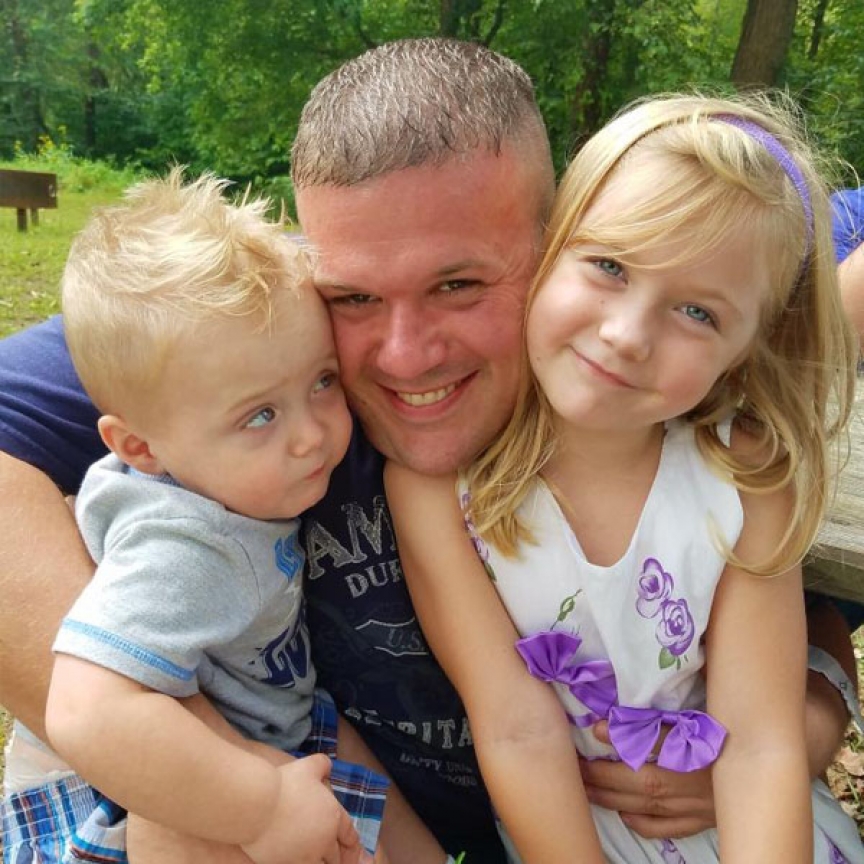 Derrick Ridgway, died being labeled an addict to all those who only knew Derrick 'The Addict.' Derrick was so much more and I'd like to introduce you to him.

My son, Derrick! He was extremely intellectual. Now, I know every mother thinks that about their child but let me explain. Derrick wrote a book and it was actually published by Tate publishing. It was on Amazon and Abe books. His oldest daughter, now 22, designed the book cover for him (she loves drawing). He was so proud of that book! He named it Fall of Freedom: Phoenix Rising. He was in the process of writing his next book before he passed.

When Derrick was in high school, he was lazy. He didn't want to do homework so counted only on tests to pass. Barely passed by the skin of his teeth. I said smart but he was lazy! However, all students were required to take the SAT test. He got 100% on that test and received a nice scholarship for it.

When Derrick was 7 years old, the school had the kids selling candy bars for $1 each. I drove him around and explained to him he had to frequently count his candy and his money and if he came up short it's his responsibility to do the right thing. Thru the day we seem to be fine but at some point, he did his count and his bank was $1 short. I asked him what his plan was. He sat and thought a few minutes and then said "I got it, I'll sell the next candy bar for $2."

Derrick was also attending Devry for Web Design (I'm in IT. Guess I made a little influence😊) and was going to Real Estate school for his license. He showed ambition. Just a couple examples.

As Derrick grew up, he had a sense of humor that was out of this world. This is probably one of his highlights. Maybe some of his downside as well. Not sure if he took things as seriously as he should have when I spoke to him. He always seemed to make a joke out of stuff. And honestly it was pretty funny!

There is one thing that never changed with Derrick, his stubbornness. Derrick always knew better and always had the best way. Oh yea, Derrick did what Derrick was going to do and had control.

Derrick left behind three children two daughters and a son. Oldest daughter is 22 then a 10 year old, who turned 10 the day after his death. His son is now 5. Derrick's oldest daughter is working and has been in college to be a vet. The 10 year old daughter I adopted on March 12, 2020, and the 5 year old son was adopted by my other son in October, 2019. The best decision Derrick could have made in his life was to realize he could not take care of his children and asked if we would adopt them. I know 100% he truly loved all his kids so I know it was difficult and very heroic and unselfish to make that decision. At that point in his life, he knew the kids would not have a better life with their parents (who are both on drugs) unless he let them go.

I asked Derrick several times why, how and when all the drugs started. I only got "You will never understand" in response every time. Because Derrick was a writer, he emailed me a poem in 2018. I pasted at the end. Please read it as it really equates to his struggle and more than likely several others.

As time proceeded to pass, Derrick and his life began to spiral out of control He lied about his addiction and how he had things under control. He would lie about the smallest things that never mattered. He would continue to try to make me believe he was sober. Derrick knew I got to the point I couldn't believe him anymore. He was losing weight rapidly, he would constantly tell outrageous stories that contradicted the last. He knew I would do anything for him. I tried to help him get into housing, rehab, etc. He just wasn't as ready as I was. 😢

I love him and will miss him for the rest of my life. I prayed so hard for him to use his intellectual brain again before it's ruined and come back as my son, Derrick.

God bless all of you for losing your loved ones as well. God bless anyone who read this entire message. 🙄

Lots of things I said I’d never do
I was naïve had no clue
Now I know I was wrong, spoke too soon
I used that lighter and spoon
But before you judge, I was just like you
Went to the doctor one day, and that’s where my addiction made its debut
With just one piece of paper and a pen he changed my whole life
It would just be the beginning of years and years of strife
Started off so innocent, I believed he knew best
But with each new “treatment” I became more and more obsessed
To my family and friends I started to lie
But all I had to do was go to the doc to resupply
Quicker and quicker the scripts would run dry
On the streets I found a new ally
The dope boys I met became my new best friends
I’d lie to myself and say it was just a means to an end
Its ok because its still what Im prescribed
Im not doing drugs or dope, I believed my own lie
Then one day the doc said good news your cured, no further need for a script
But when I woke up I was sick, so I off to my “friends” house I skipped
But now with no script I had to buy three times the amount
Started looking for a way to get my medication at a discount
Further and further down the rabbit hole I fell
I felt like I was staring at the gates to hell
When I cant afford what I “need” I feel like shit
Then after saying “I’d Never” I decided to try “just one hit”
That brown liquid flowed easily into my vein
But with it my life trickled right down the drain
The first taste was all it took didn’t see it coming; I was already on the hook
But I am still in control, still functioning, still doing things by the book
How quickly things escalated, one day Im fine the next Im homeless
Never have I seen something that was so ferocious
It was my worst enemy, yet to me my best friend
It would be a long time coming before I could see the end
I’m still ok I lied, I’m just on a down note
I’ll just start selling a little here and there, just to stay afloat
The line for things “I’d never”, became very blurry
I became involved in violence and crimes in a hurry
The only voice I could hear anymore wasn’t even my own
How heroin became my life was unknown
I’ll do anything not to be sick
When will it finally click
For all of addicts, the bottom is different; we find a way to go deeper
The value of life gets cheaper and cheaper
We watch everyone in the circle with us die
But we become so dehydrated we can’t even cry
I don’t wanna live but am too scared to die
So I used and used just wanting to hide
After it was all gone I finally ended up all alone
I looked to the sky and let out a groan
Carry me to the finish line or kill me I begged God
Then something happened that was very odd
For the first time in forever I heard a voice that was different than the drug
It was warm and welcoming, and I once again felt loved
I found my way broken, scarred and scared to a treatment center
At the door I trembled scared to enter
Now or never, its time to decide
Which is braver? To live or to die?

Submitted by: Anita Ann Hughes To edit this memorial, please contact us at info@shatterproof.org or 800-597-2557.