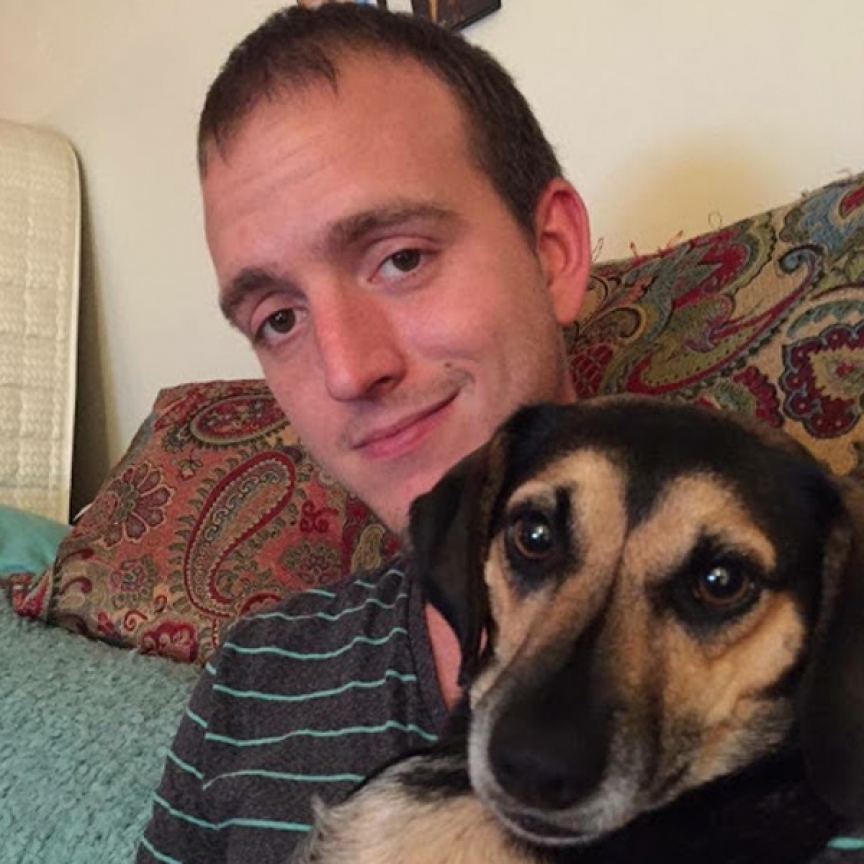 Garrett Robert Moody, born June 19th 1989, of Point Marion died June 2nd 2017, of an accidental overdose after battling addiction for over half of his life. Outwardly, it looked like Garrett had it all: support, love, intelligence, talent, amazing family, loving girlfriend, working at a job that he loved.

He enjoyed watching the Pittsburgh Penguins, getting together with family and friends, spending time with his girlfriend and their puppy daughter Lola. He was an active member in the NA community and was working the 12 steps with his sponsor. He hoped to help others fighting addiction, to travel, to have a family of his own, and to own a food truck. He loved playing with yo-yos and doing research on new technology. He especially loved hiking and randomly climbing rocks and walls, making everyone around him nervous. He was adventurous with a big sense of humor.

Garrett had a very opinionated personality that showed his individualism and intelligence. He was open-minded, thoughtful, and accepting. He did not judge others; because he knew everyone is fighting their own battles; just like inside he was fighting his battle against addiction and anxiety.

He tried so hard, and fought for so many years. He was in many rehab facilities and even jail. Garrett was a good person, with a horrible disease.

The disease did not let him out of its sight for one minute- he was constantly fighting. He lived in a world of chaos for many years. He had so many brushes with death that we are lucky to have had him this long. At one point, Garrett was clean from drugs and alcohol for three years. It was then that he really began to shine and more people could see the person he truly was, aside from his addiction. He was resilient and loved people unconditionally.

It’s important to not allow addiction to define a person. They are people with a disease. They are someone’s child, sibling, significant other, best friend- they mean something to someone. They also love and care about others, they do not want to hurt their loved ones or commit crimes and more times than not, it’s the shame and guilt of their behavior that keeps the vicious cycle of addiction continuing. They don’t want to leave their loved ones behind, grieving, asking themselves what they could’ve done differently or how they could’ve saved them. Garrett did not want to hurt us.

Garrett losing his life to addiction is not because of his “lack of strength” to “just quit using.” Most recently, Garrett was clean from drugs and alcohol for one year, but the relapse after having so much clean time is often deadly, because tolerance is lost. We thought Garrett was winning the battle and enjoying life again in recovery.

Love alone is not enough to heal addiction. Garrett’s family and friends loved him through it all. If love could’ve saved him, he would still be with us today. And addiction does not discriminate. Addiction does not care how well you were raised, or how intelligent and successful you are.

Garrett was so thankful to have the loving family and friends that supported him every step along the way. He never took anything for granted throughout his recovery. Garrett is not just another statistic of a life claimed by addiction. He fought the demons inside him for so many years, that although he will be missed so dearly and the thought of life without him brings unbearable pain, it is comforting to know he is finally in peace.

Although we are mourning the loss of Garrett’s beautiful life, we hope that bringing light to his struggle with addiction may help others- whether that is seeking treatment for yourself, supporting a loved one struggling, trying to understand addiction and mental illness, or just being more empathetic and compassionate to those suffering from addiction and the people that love them.

Submitted by: Brittany Walters To edit this memorial, please contact us at info@shatterproof.org or 800-597-2557.