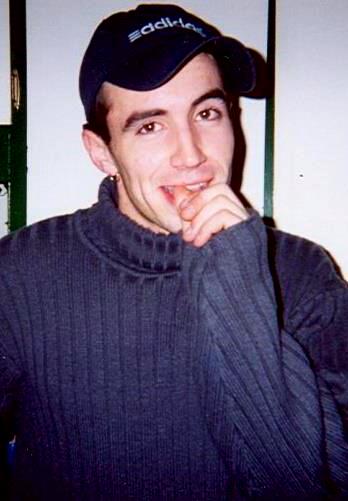 Born
April 29, 1979
Died
September 19, 2006
Our Ian is a sweet, gentle and loving soul. He was a happy, bouncing baby boy who captured people's hearts with his sweetness, his big brown eyes and his cute crooked smile which lit up his whole face.
Bookmark this
Photo submitted by
Lesley
Tell us about your loved one.
"Our Ian is a sweet, gentle and loving soul. He was a happy, bouncing baby boy who captured people's hearts with his sweetness, his big brown eyes and his cute crooked smile which lit up his whole face. As a small child, he would race his Smurf Bigwheel down the sidewalk, tearing around corners, which earned him the nickname, ""Screamin' Ian"", given to him by a family friend. He was always a good friend and ready to give a helping hand. He was easy to talk to and girls loved him. Ian was very intelligent, musically talented and artistic. He had a wonderful sense of humor and he laughed easily. Ian was most at home in Nature. His first love was music of all kinds. He played the guitar, trumpet and baritone. As a child, he could simultaneouly play two flutaphones with his nose. He could be stubborn at times. School often bored him, (except for band) and when caught daydreaming by the teacher, he could always answer the question correctly. Ian was such a natural at music that according to his sister, the band teacher would choose music for the band that would challenge him. He was kind to animals and a couple weeks before he passed, he told me about how he and his friends found a sick Red-tailed Hawk which they fed and took care of until the proper authorities could take it. Now, whenever a Red-tailed Hawk comes unusually close to me, I like to think that it was sent by Ian as his way of saying, ""Hi Mom, I am with you"". I just want people to know what kind of person Ian was, to see his humanness and that good people sometimes end up with an addiction of some kind, whether the substance is illegal or legal, whether the addiction is to drugs, alcohol, food, sex, or cigarettes. They are not their addictions and they still deserve our unconditional love and compassion. Between his father's family and mine, Ian has two sisters and five brothers. We all love and miss our ""Nino"" more than words can express."
Tell us about Ian's struggle with addiction
"Ian struggled with a heroin addiction and thought that he could overcome it on his own, mostly because of the cost of treatment. I know how bad he felt about himself. He felt that he was weak and a disappointment to the people who love him. He felt that he was being judged by others, but in reality, he was his own most critical judge. On the last Mother's Day before he passed, Ian wrote a sweet letter to me, telling me that he would make me proud. I already was and will always be proud of him. When a person has an addiction, it in no way means that they are bad people. From what I had been told, Ian had been able to stay away from the heroin for about three weeks when the dealer came to where he was living. He was not strong enough to resist and ""one last time"", he bought what he thought was heroin. It turned out that the heroin had been substituted with Fentanyl, which caused my son to die from ""positional asphyxia"". My heart aches for Ian and everyone else who suffers from addiction. I think they always feel alone, even in the company others. How I wish that it was enough to just hold our addicted loved ones and surround them with love and compassion until the addiction has lost it's grip and they love themselves enough to want and allow healing. Someday I hope to be able to help others get the help they need to heal themselves in body and mind."
What made Ian smile?
Almost anything made Ian smile, especially playing his guitar and being with family and friends. He liked cooking and was very good at it. He also loved being in nature. He had spent a couple years in Arizona and dreamed of going back and working for the Forestry Service there.
What do you miss most about Ian?
I miss everything about my son, especially the closeness. I can still see his contagious smile and hear his laughter. I can still hear him call me Mom in his soft spoken voice and see him walking down the street with his long legged stride and rhythm, which made it obvious that, as always, he had a song in his head.
Memorial
Bookmark this
Share this