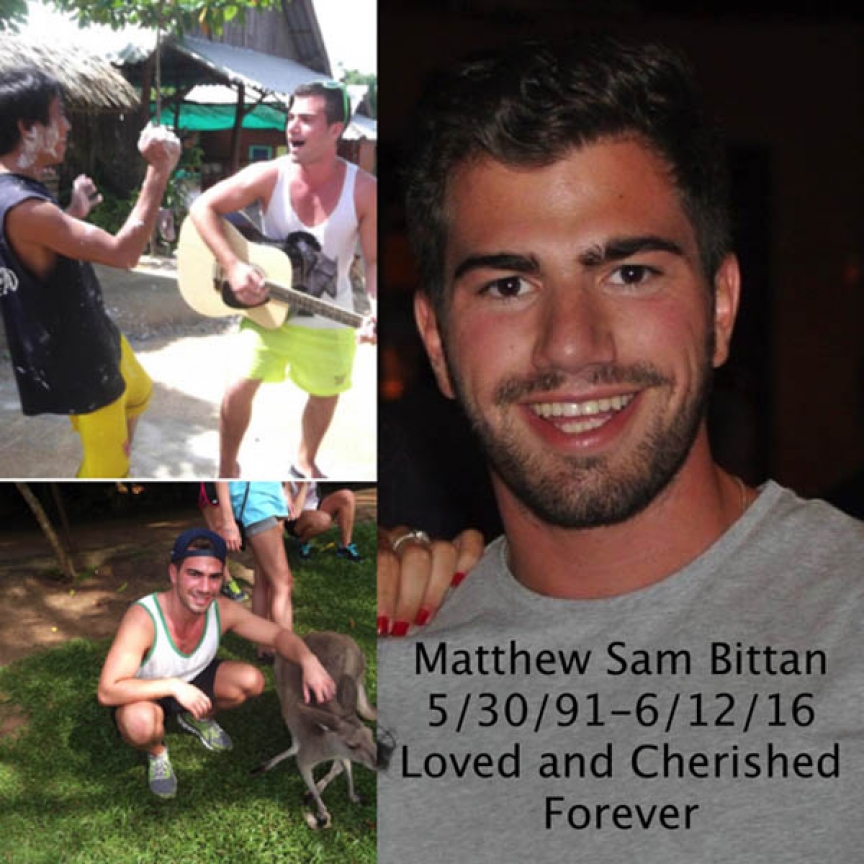 Matthew was the most loving, outgoing, caring, empathetic person you could meet. He had friends from all over world. He would walk into a room and become the life of the party, befriending everyone that came into his path. He was soulful and loved adventure and travel. He loved taking his guitar everywhere and entertaining a group or just sitting on a beach and playing for his friends. His favorite song was "Wonderwall" by Oasis. He loved studying different cultures and knew how to bring people together. No one ever felt left out. He was all inclusive and it didn't matter who you were or from where you came. He also loved his family and always looked forward to spending time with everyone over the holidays and summers.

Growing up, Matthew was always high energy and never slept. Even as a baby he was always wide awake and needing to be up and out of his bed and held. He loved and needed attention always (not in a bad way) but he just wanted to be loved and he gave love back. When he was in school he was very active and an amazing student. Because of his high energy we had him tested for ADD and a very detailed IQ test that took a few months to complete. They found that he did not have ADD and that he scored in the superior range of IQ for his age, which may be why he just needed to always be challenged. His mind was alway on.

Matthew got addicted to pain killers after a few minor surgeries (tonsils removed, adenoids removed, deviated septum, appendix, hernia). He also had issues after hurting himself wrestling in high school, complained about minor pain in his back and neck. His doctors especially once at ASU easily prescribed different medications to him in large amounts (painkillers and xanex). Once back in school, he continued to get prescribed meds basically for anything he needed. It seems like a few of his fraternity brothers at ASU did this together because a couple have passed within the same time. I think one of the biggest reasons he got hooked was that he felt it helped knock him out (as he said) so he could get some sleep. He used to be up for days if he didn't with his mind on. This is how he started self medicating. As his tolerance grew to the meds so did the amount, which then led to him (trying) using heroin by the time he was a senior. We only found out during his senior year. He was a normal college student. He didn't seem any different from any of the other kids we knew. If anything he was happy, outgoing, fun and smart. There where no signs that said I"M AN ADDICT (or maybe there were and we just didn't know) but once we knew that he was taking prescription meds, we put him directly into a rehab center for a month, then a step down from there into a sober living. We still had no clue he was doing anything more than that, until he was in rehab and he had to come clean during family week. Once home he was fine but struggled over the next few years and ended up back in detox a few times. He really wanted to just be ok and normal like any 24 yr old. After several months, we finally thought he was good. He was sober for some time and he wanted to finish up school and take classes in LA for film. We agreed to this if he continued with an outpatient program with therapy and lived in a sober living house to make us feel comfortable with his being away. Unfortunately, it only took one more mistake after being there for six months. Matthew passed from an accidental overdose on June 12, 2016, 12 days after his 25th birthday. I never read the toxicology report to know if it was tainted with fentanyl or just too much. At the end, it just doesn't matter. Addiction took him from us and the world. He is forever in the hearts of so many people who's lives he's touched and saved. He's missed every moment of everyday and his life will continue in the memories he's left us all with. Love, Mom

Submitted by: Franciska Bittan To edit this memorial, please contact us at info@shatterproof.org or 800-597-2557.