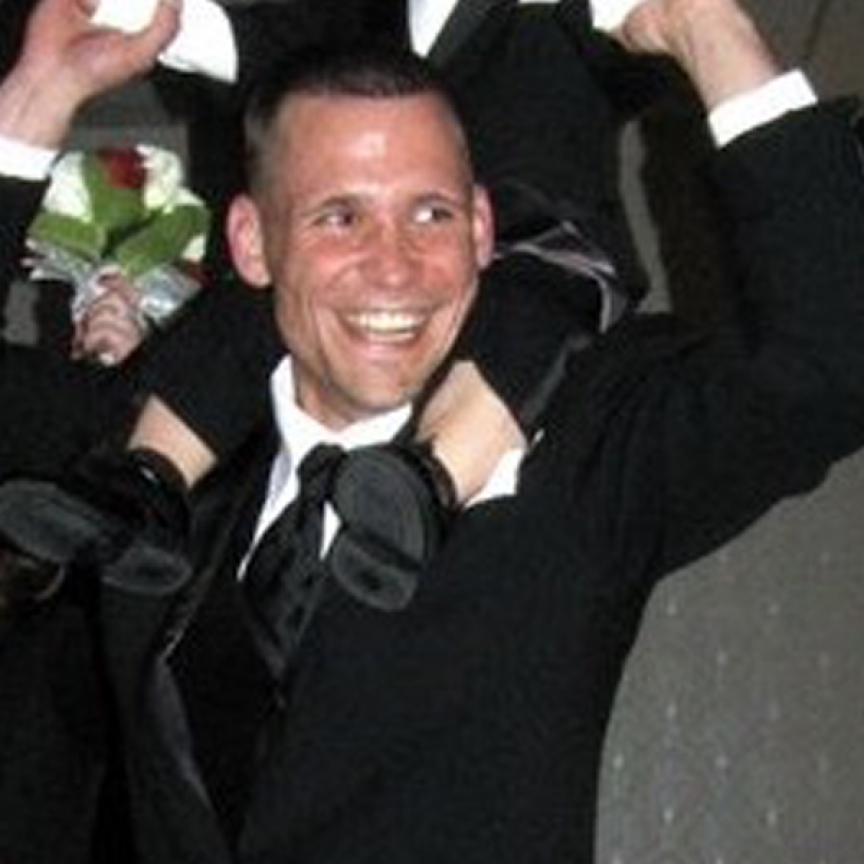 This is something I wrote on David's 2 year anniversary of his passing. I wanted to share it in memory of him.

Two years have passed since you left David and the world is a different place. Much has changed. I am changed. The fog of the beginning is lifting. The acute attacks of realization still knock me down but I've learned how to recover. Despair has loosened its tight grip ever so slightly and maybe just temporarily. The time has made me acknowledge. Not accept but acknowledge. I now know that I won't find your face in a crowd, even in the largest of ones. Trust me. I've tried and I've tried.

When describing grief to a friend, I said it feels so much like fear, echoing the sentiments of the writer C.S. Lewis. The only way I can describe it is by comparing it to a time when one of my kids went missing. Granted, David is my younger brother, not my child. But maybe the feeling is the same because it's rooted in the desire to protect. Running through the house. My heart racing as I open every door. My mind floods—what do I do? Who should I call? What if something has happened? Then I find my Alex. Hiding in the closet. Happy. Perfectly fine. I realize I stopped breathing. I take a breath. Grief to me feels just like that but permanent. You know you've lost something, someone and when the weight becomes too heavy your mind dampens the pain by granting you brief moments of glorious forgetting, only to throw you back into the reality head first with the very. Next. Thought. David is always the thought after the last.

My mom has said life is full of landmines. Do your best to avoid them. I've run over some potholes in my life but never this. My friend compared what our family experienced as though a bomb went off. Pieces of what was, scattered everywhere. We picked up the fragments desperate to match them back up. Slowly realizing what once was, will never be again.

And "what once was" was far from "normal" but it was ours. David struggled but then there were stretches of happiness. Separate and distinct from any darkness of the past. Not a new chapter of David’s story but rather a new story. A new beginning. We didn't dwell. With each and every new beginning, we held onto its lightness like our lives depended on it. And they did.

There was joy. Him and Steph moving into their first place together. Painting the walls, planting a garden, making it a home. There were the times spent on my patio, laughing into the night. David and Steph finding the home they loved. Feeling settled. Me calling David. Wanting him to see this beautiful engagement ring. Him pulling out all the money he had to buy it. The joy. Steph getting pregnant with Russ and the gender announcement dinner. Steph and David standing at the top of their stairs. Us opening the door to Steph wearing an “it's a boy” t-shirt. The excitement, the anticipation, the joy. His love for Russ which was instant. My husband and I staying at the hospital late into the night, to leave and come back early in morning. Opening the hospital door to two new parents who looked like they had been doing this for years. The joy. Driving to CHOP for Russ's surgery at only 1 month old. David and Steph distraught. David feeling like this was his cross to bear for the things he had done. Russ turning into an amazing little boy. David wondering what he did deserve it.

There were the ghost stories around the fire pit. The birthday parties. The over the top Christmases. The long text messages. The game nights. The joy. There was the time I watched David's eyes fill while watching the video of the birth of my daughter, Liv. He knew we waited for her. There was so much joy.

But there was struggle. More hidden than revealed. When he wasn't well, I'd learn the vague details secondhand. It left me feeling sad, confused and angry. And then I'd see him and the emotions would dissipate because all seemed fine. Addiction teaches you to be a chameleon. And I only saw what I wanted to see. I couldn't begin to understand the depths that addiction could take a person to. It was uncomfortable. It was too scary of a place to let my mind go to. And I’m trying to make peace with that. I recall one of my first thoughts when he passed was, he should have known better. Why do this when you have so much to lose? He's not a teenager for God's sake. He should have known better. How crazy that sounds to me now. Addiction quickly turns into not a choice and does not discriminate. It will embrace anyone.

Now we have a new reality, one that we are blindly feeling our way through. David's New Day was born from this new life. It allows me to say his name aloud nearly every day. A small gift many who have lost have not been given. At times, it also feels like I'm picking at the scab. But I know that pain doesn't exist without love so I continue on.

By focusing on this new endeavor, what we can do to spread the word, to grow bigger, to do better, it allows my mind to wander. I imagine David's reaction to all of this. I can hear him saying, "Really Jul?” with surprise and a bit of amusement in his voice that we chose to be so open and take this on. If he wasn't in Heaven, he'd be right here. He might have even been the one to speak at our 5K. An audience didn't scare him. But if HE were here, WE wouldn't be. And I try not to torture myself anymore by wishing for time in reverse. We are where we are. And now, we are who we are. And I like to believe that one day I will sit down with David and tell him all about this and he'll respond, "I already know."

David, our hearts hurt today and every day. We miss you and we love you.

Submitted by: Julie Smith To edit this memorial, please contact us at info@shatterproof.org or 800-597-2557.