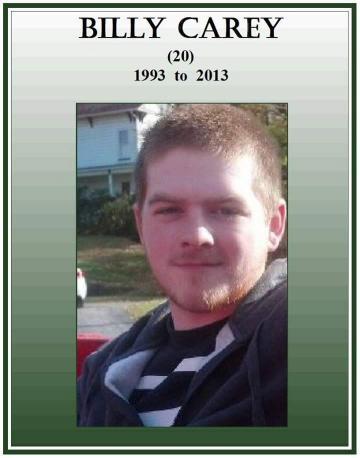 I miss everything. Spending time together. His smile and laugh.

Bookmark this
Photo submitted by
Helen Carey
Tell us about your loved one.

Billy was a loving son and brother. He enjoyed skateboarding, snowboarding, fixing up his car, his dogs and cats and watching the Yankees and N.Y. Giants. He was a dedicated worker in the produce department at Shoprite.

Tell us about Billy's struggle with addiction

Billy tried alcohol in middle school and stole my left over Oxy. And took it to a party and snorted it with friends. He then smoked pot and we thought it was a one time thing but through out his high school years a kid at school stole pain medicine from his Mom. Billy was supposed to sell it for him, but instead took it all. Money went missing and he got beaten up and thats when we realized he had a real problem. We wanted him to graduate and thought by confronting this kids parents we would end his supply. Somewhere during 2011, he turned to heroin. When more money and items went missing we called insurance and they placed him in an IOP program 3 days a week and on suboxone. They kept increasing his dosage and he was still using. We begged for in-patient, called several places and even were told he had a bed. He was then turned away at the door because insurance said he was not sick enough even though he was snorting heroin. Back to IOP he went. We thought he was doing better until jewelry went missing. Now after a year and a half of this we took him to the ER and were told there was no rehab there. I begged them saying he couldn't come home and they gave us a number to call. Two days later he was accepted in a 14 day in-house treatment detox center. Then Christmas Eve we drove him to a 28 day in-house center that his grandma paid for, but it was in Pennsylvania and they did not have N.A. there. We were thrilled though because he was safe and seemed optimistic. He came home at the end of January 2013 and went to a local IOP program and after over 90 days clean he left his IOP and bought heroin. The next morning, March 19, we found him blue in his bed. He was taken off life support on March 21, 2013.

What made Billy smile?

He loved his girlfriend of many years. He enjoyed music and put a new stereo with an amp in his car. He was proud of his autistic brother and had a puzzle piece tattoo on his arm in honor of Ryan.

What do you miss most about Billy?

I miss everything. Spending time together. His smile and laugh.