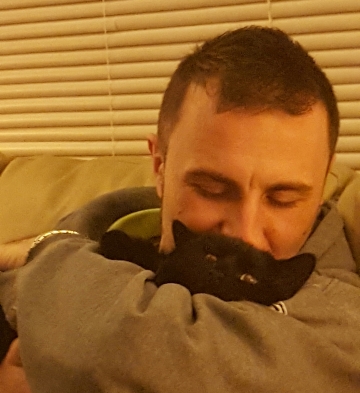 I miss cuddling up to watch TV. I miss his voice, his comments and his laugh.

Bookmark this
Photo submitted by
Nicole
Tell us about your loved one.

He was intelligent, funny, charming, attractive, rebellious . . . He thought a lot about science, philosophy and life. He loved old school R&B. He liked watching South Park, House and The Walking Dead. He loved his black cat. He sang to the radio. He was a good cook. He was getting really good at calligraphy.

Tell us about Jon's struggle with addiction

He started with pot, alcohol and some painkillers when he was a teen. He mostly drank and smoked weed through his 20's. When he was around 30 he started abusing painkillers with friends. He was soon doing crack and heroin, mostly heroin. Once the addiction to heroin started he never stopped for more than a few weeks here and there. This went on for six years. He lost a high paying career, a nice apartment, a beautiful girlfriend and his dream car. He got to the point where he hated his life. He finally went for inpatient treatment and was feeling great but soon the boredom and depression sunk in and he relapsed. A week later he overdosed on Fentanyl and passed away.

What made Jon smile?

Everyday he would go on the Reddit app and laugh at all the stupid posts. He thought South Park was hilarious. He liked getting reactions out of people and found it amusing if he could get someone worked up. He had a great smile.

What do you miss most about Jon?

I miss cuddling up to watch TV. I miss his voice, his comments and his laugh.