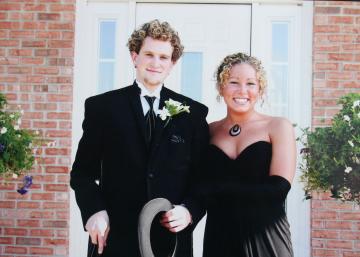 Born
July 28, 1985
Died
January 4, 2008
Bookmark this
Photo submitted by
Lee Ann Sanderson
Tell us about your loved one.
Christopher was a beautiful soul, such a sweet a precious gift to all of our lives. He was a very sought after friend growing up. Chris was very popular without trying. He had a spirit where people just wanted to be with Chris. Our Christopher was kind and passionate about anything he chose to be involved in. He loves Sports,he played competitive tennis, football, basketball and was a great golfers at a young age. He also loved politics, acting, singing, performing, he went to film school and wanted to study politics and law. He always had a lot of friends. He was a very loved and adored son. He was beautiful physically, inside and out. His family so adored him and was always very over protective of him, since I, his mother, lost a husband in a car accident at age 24, I always felt this need to protect him from the hard stuff in this world.I wouldn't allow any unnecessary risks with him. I loved him so much. At his service we had about 2,000 people come through and so many kids from all walks of life told me, he was his best friend. He always had a calming peace about him when in the presences of others and encouraged others to live their dreams and live their lives. I miss him and love him so much!
Tell us about Christopher's struggle with addiction
Christopher started smoking pot at age 16. I could tell right away that his attraction to pot was not normal. So many people say, oh their just kids, they are just experimenting, but I knew he loved it way too much. I told him I would not allow him to go down this path because I had a couple of brothers that took the drug path at a young age and although they quite at 19 and 22, they have always had those addictive personalities. I could see that Chris totally changed his friends and his interests with smoking pot. He said he would never do any other drugs and I should know that. I for sure knew that he could try other drugs because of his personality. He was passionate about anything he did, wheather it was acting, sports, the stock market at age 10 that he discovered, he would ask for the Wall Street Journal every day at 10, seriously, he was 10! At that time, now looking back I can recognize his addictive personality. His dad would take him to the dog track, he loved, loved, loved that. He also had a gambling addiction, always buying lotto scratch offs with his money, which was also an addiction. I think this poor kid was addicted to anything he ever did. I looked at is as being passionate, but now I see it as his addictive personality. I wanted to put him in boarding school, where all you do is study and get in the best schools, when he started smoking pot. His dad wanted to give him another chance. His dad NEVER even tried pot, I tried it when I was young, but did not like it, it made me paranoid. I didn't even have alcohol in our house while my kids were growing up. He grew up a Christian, but not perfect, home. Alcohol was never his problem. He got a really nice girl friend who went to Christian school and kind of laid of the pot stuff for a few years until they broke up. He became to depressed/anxiety and so sad over this break up! He had his whole life planned with this girl. I never saw a kid so sad in my life. He started self medicating. He started snorting coke.
What made Christopher smile?
His family/friends, animals, he was a practical joker and liked pulling jokes on people. He was kind of the class clown in school, but quiet at home.
What do you miss most about Christopher?
I miss his physical self, his smile, his laugh, his funny jokes, his curly hair, his charm, his sparkling blue eyes. I miss his spirit and I miss everything about him. I want him back here with me now! It's been so hard here without my beautiful boy.
Memorial
Bookmark this
Share this