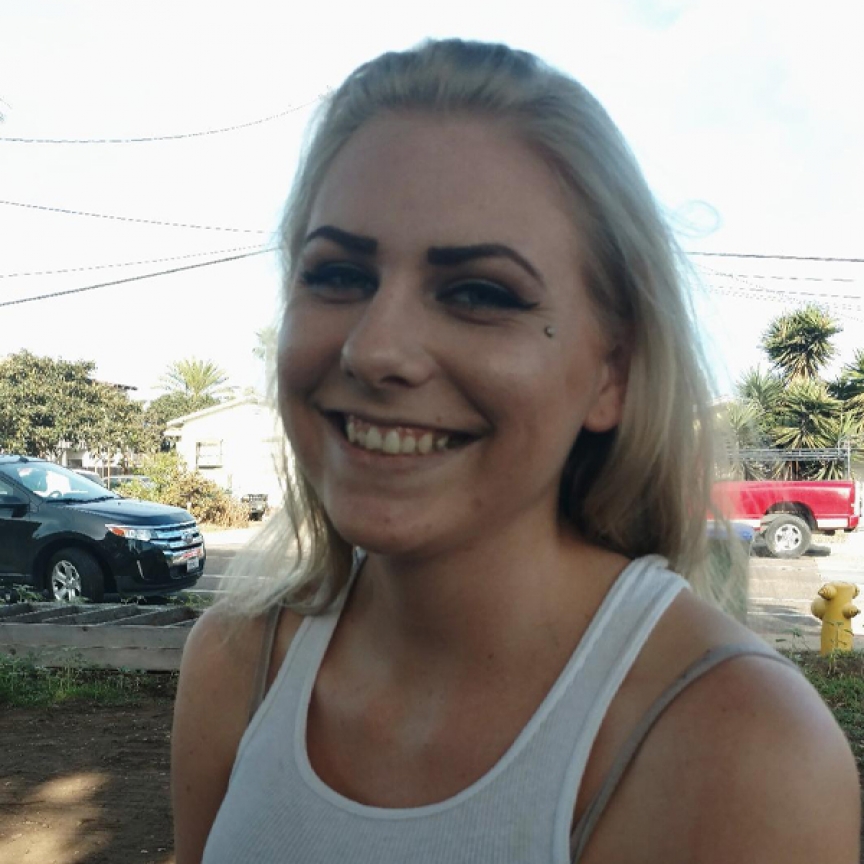 Maddy Rae was 22 when she took her last dose of heroin. She was a beautiful girl with a hard struggle after her first introduction to heroin. Yet she was a free-spirit who loved to laugh, play and be silly, she was always the life of any party, gathering, home or relationship she had. Maddy was very close with her grams and mom, yet even if you were just an acquaintance, she would treat you as you were her best friend. Her favorite thing to do was help people and make them smile, and she was more gifted at it than anyone I have ever known.

Maddy had been in and out of rehabs after she went to prison for 19 months, at the age of 19. Although heroin had not really gotten her too hooked prior to prison, after prison she suffered from a full blown addiction. She got in trouble for stealing a 1/4 pound of marijuana from an 18 year old drug dealer. This guy reported her and the others with her, and although her first offense, they gave her maximum sentencing as well as putting her in the most dangerous prison. It was there where she was introduced to a real crime centered life... drugs, fighting, stealing, etc.
Despite her location, even in prison, Maddy inspired and helped hundreds of girls find peace and happiness in their souls. After her passing, the letters flooded in, even from women who were on death row, whom Maddy had imagined to inspire and bring love to their hearts. Such as though she was a gift from God to be sent to these places to bring light and laughter. As, no matter where she was, that was what she brought.

After prison, Maddy found a boy that could provide her with all the heroine and drugs she wanted. He, too, suffers from addiction and he is a dealer as well. As she continued to do drugs, the parole agency and her family (me) became more and more worried and so multiple rehabs were tried. The one rehab had her sober for 43 days, and truly, it was an amazing 43 days. She was so proud of herself, family counseling sessions were so positive and building for her self-esteem, self-worth, and motivation to stay clean. However, as Christmas approached, and she had not seen a Christmas since before her prison sentence, she got stir crazy and called her boyfriend to pick her up. It wasn't hours later when she was high. Christmas day came around, and she told me she would be ready to go back to rehab the next day. The day after Christmas, she returned to the rehab just to leave the next week, which led to jail (parole violation) and then to a court approved rehab out of the city. Yet, even that did not stop her. She managed a ride from there to her last dose. Many could not believe she was addicted to this ugly drug, she was the epitome of beautiful. Inside and Outside. People all over the coast celebrated her life in the most beautiful reverie. She was best friends with her mom and grandma whom she called mamma and grams. Her smile could take a sick person out of a coma as if it was alive. She loved so deeply and raw. Never minding the haters or naysayers. She just smiled and carried on. She longed for a family, yet she understood her addiction needed curing before she could bring a child in this world. Maddy has one sister and one brother. Both of whom loved her beyond words. She was like the glue to us all. The one whom we fret and worried about... or laughed and giggled about. She also has two stepsisters, whom she showed the meaning of true beauty, as both girls had a not so healthy background of what it means for a woman to have true beauty, she showed them true beauty is an inside job. Maddy displayed this in her life, despite her challenges, that the most important thing in the whole world is to be kind and loving to the people you meet, yet take no crap! And that is what made her the most beautiful of beautiful souls. She will be missed every single day. I, her mom, fought tooth and nail to keep her alive. The day the news came felt like the biggest defeat of my life.
I miss her every single day. I struggle every day with the fact that this just can't be real. The anger comes in waves, mostly at myself for not being even more aggressive in keeping her sober. Yet, it wasn't something I had no power over. I gave birth to her when I was 20 years old, and her and I grew up together. It has been the single most difficult blow of my world and although I have no questions of why, or even feel any injustice to God or the Universe, instead I just get angry that I am still here and I have to live this live out without her. Its a hard pill to swallow every morning, yet I get up and do it. Feeling powerless in a humbling emotion and as each day comes I realize the lack of power I actually have.
I have pictures of her everywhere, and in every moment of this life so far I just want to cry, because she was truly my best friend. The girl I was gonna grow old with. And instead she's frozen in time as this young beautiful angel that I will never see in that form, ever again. She will live through me in every way, and although I cannot physically see or hear her, I know she is with me. I know she is guiding me. I know she is okay with how sad I am. But I know she loved me so much, and that is what will carry me through. She loved her daddy too, so much. He was the man of her dreams that she couldn't seem to get enough approval from, she searched and searched for a man to save her from all this. I wish it could have been her dad. But as I sat thinking about how badly she wanted a dad/lover/man to rescue her, my mom looked at me and said... Ya know what, she was rescued by a man, the most loyal and strongest man ever... Jesus saved her. It was the perfect man for the job, and until I see her face again, I hope she is having a blast up there with him. I have a feeling she made heaven a bit lighter and brighter. Her radiance was out of this world.

Submitted by: Amanda Rudzinski To edit this memorial, please contact us at info@shatterproof.org or 800-597-2557.