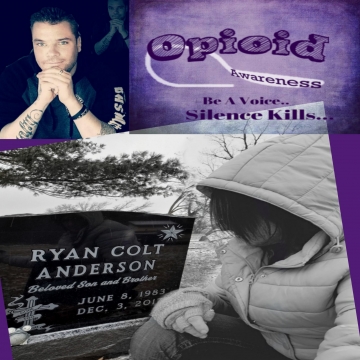 Ryan was a person who always made you smile and laugh. His charming personality, along with his beautiful blue eyes, made him a very loveable fiancee, son, brother, and friend. Ryan loved to live life on the edge; the more excitement the better. One would never know looking at him from the outside that inside, he struggled so deeply with the demon of addiction.

Bookmark this
Photo submitted by
Anne Emerson
Tell us about your loved one.

Ryan and I met in November 2012. He was just out of prison on work release. Both of us were sober. It was a surprise to me that we hadn't crossed paths before (with one exception) being we had a lot of the same friends. I had seen him one time walk into a friends house I was at, but he didn't see me, and I thought to myself who is he, this arrogant, "I'm so macho" dude. Little did I know a few years later I'd be in love with this man and find out he wasn't an arrogant, macho dude. He was a loving, compassionate man who had the most beautiful blue eyes. A charming smile that matched his personality. He always knew how to make you smile and laugh, one of the things I miss most about him.

However, there was a side to Ryan not many knew about. It wasn't his addiction to drugs, it was his battle on the inside, his battle with depression, anxiety, low self esteem, and self worth. And because of these things he began using drugs, in his mid-teens to cope. From Oxy's which eventually turned to heroin, to Meth, Xanax, and, for a short time, alcohol. His drug use led to legal issues, which held great consequence, including eight years of his life spent in jail/prison. I had never seen heroin before until I met Ryan. I hadn't seen anyone overdose either, until I saved Ryan's life for the first of six times. Horrifying, to say the least.

On November 28th, 2017 Ryan was given fentanyl under the assumption it was heroin. He overdosed and was on life support for five days before the decision was made to pull him off, which was not only the most difficult decision one would ever have to make but my heart believes it was the worst decision ever made. I wish every day he would have been given more time and a second opinion. Watching him take his last breath, his heart its last beat, was the most difficult thing I've ever had to go through. A beautiful soul taken too soon.

He was the man I was supposed to marry and spend my life with but today, I am grateful for the time we had together because in that time of 5 1/2 years, we created some beautiful memories that I will carry forever in my heart.

I miss him every day, the struggle of losing your significant other is a struggle unlike any other.